A Cardinal analysis of 2017 crime reports from on-campus and affiliated housing shows The Arch apartments had 52 reports, including two shootings.

A drug-sale altercation at The Arch Aug. 30 ended with a still-unidentified man shot multiple times in the abdomen. Morrell Artis, 22, called 911 to the scene and was charged with first-degree assault and trafficking marijuana.

The second shooting at The Arch Dec. 18 wounded a non-student. Cash Collins, who lives at The Arch, said his roommate, who used a towel to try and stop the bleeding in the victim, said it looked like the victim was shot in the chest.

After looking over affiliated housing crime reports from the University of Louisville Police Department, The Cardinal found most crime happens at the four corners of campus. The Arch leads, followed by The Province with 32 reports and then Clubhouse Apartments and The Nine both with 21 reports. 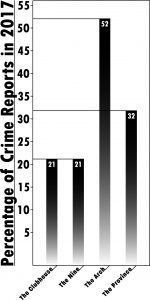 These four affiliated housing options, along with all other affiliated U of L housing, do not require their residents to be U of L students.

“I definitely wouldn’t live in The Arch or The Province. I grew up around here so I know all the bad stories of those places,” Copley Allen, a sophomore student living at The Nine, said. Copley said The Nine seems overall pretty safe, but says she doesn’t roam around the complex.

Copley said even though someone needs a key fob to get into the apartments, it’s easy to get in if someone waits for another person to exit and holds the door.

“People aren’t going to be like ‘no, you don’t live here,’” Copley said.

The Arch had the most theft and criminal mischief reported in 2017, while The Province led in assaults reported.

In January through March, The Province had the most crime, leading the quarter with 12 reports. The reports ranged from assault to theft over $500 and criminal mischief.

The Arch led the rest of the year with total crimes reported, including more than 10 reports of theft over $500.

The Clubhouse Apartments lead the year in burglary reports.

Jessica Jangam, a senior living in the Clubhouse Apartments, said she wasn’t surprised with the Clubhouse being tied for third in most crimes reported.

“The little area right in front of the Clubhouse is called the ‘stab and grab’ (Stop N Go Smokes & Liquor),” Jangam said. “That entire area is a primary location for so many really sketchy, illegal things.”

An attempted robbery Feb. 6 between two non-students occurred after a domestic dispute. The male fled the scene after unlawful imprisonment of the female victim.

“If you’re hanging around outside alone at 2 a.m. then there might be issues,” Ross said.

One commuter student said she wishes there were more things offered on campus to train students how to protect themselves.

U of L spokesperson John Karman said affiliated housing pays a fee of around $38,000 per year to have ULPD coverage.

The two affiliated housing options that do not pay for ULPD coverage are the Bellamy and The Retreat.

Sarah Feola, a sophomore student living at The Retreat, said she didn’t know there was no ULPD coverage for The Retreat.

“I don’t like that,” Feola said. “I feel like the university should be involved since a majority of the people living there are students.”

About the Author: Megan Brewer

Opinion editor that's won first place awards, specifically for the piece "It’s time to give David Grissom the boot," and once got asked about being "injured in some horrific backyard barbeque."