The IT store is closing and its employees will be shuffled to other jobs. Meanwhile you can snag a 30 percent discount on what’s left.

Over the past two weeks U of L has experienced a laundry list of changes. Beginning with the announcement of potential tuition increases, the shake ups escalated when Governor Matt Bevin dismantled the board of trustees and President James Ramsey offered his resignation.

The IT department announced June 30 that the Miller IT Center iTechXpress technology store will close July 8.

ITechXpress, opened in 2008, sells computers, software and electronic accessories. Technology and digital merchandise will now be offered at the bookstore in the Student Activities Center.

“Students are always our first priority when we make decisions on campus services and facilities, which is why we worked with our new bookstore partner, Follett Higher Education,” said Jeanell Hughes, assistant vice president of operations and administration, on behalf of Chief Operating Officer Harlan Sands.

The IT department has been under the direction of Sands since 2015 while the FBI continues its investigation of  VP of IT Priscilla Hancock. Hancock has been on paid leave since Dec. 2015

Sands announced U of L’s partnership with Follett in May following the announcement of new dining partner Aramark, which raised concerns regarding job losses.

Hughes assured that the closing of iTechXpress will not equate to job loss.

“The two full-time staff were offered other opportunities and we are pleased they have agreed to stay on at the university,” Hughes said.

In addition, the store’s student workers will remain in IT.

ITechXpress will continue to operate from 8 a.m. to 5 p.m. Monday through Friday until July 8. Students will be able to purchase computers and software online even after the IT store closes. Remaining inventory is being sold at a 30 percent discount.

ITechConnect, located inside the iTechXpress store, will relocate next door to the computer lab on the lower level of MITC and resume operation on July 11. 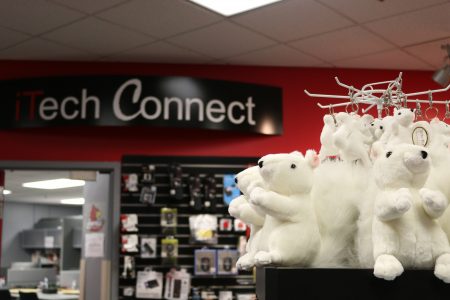