By Kyeland Jackson and Brooke Pratt—

A semi-truck hit the overpass on Eastern Parkway Thursday afternoon around 11a.m. The incident also involved two vehicles that collided with the truck. EMS crews promptly arrived to rescue both pedestrians and traffic resumed after.

Cory Cecil, a junior, witnessed the aftermath of the accident. “Cops were blocking off the street,” he says. “They had to redirect traffic on the road around the bridge.” But Cecil relates, this is not the first incident he has seen involving the overpass on the corner of Third and Winkler.

The area has been regularly having these same sorts of collisions for decades, says John Drees, the Director of Communications for U of L’ s Belknap Campus.

Marcus Jeffries is a masters student who witnesses incidents there normally. “It happens all the time. There’s been several in the past few weeks,” Jeffries says. “A couple days ago, they blocked off northbound and southbound so they could unload the entire truck.”

One on-site officer, whose name could not be disclosed due to department regulations, testified to Jeffries’ statements. “It happens multiple times a week,” the officer says. “Sometimes they [the trucks] are stuck and have to call in the company to cut open the trailer.” 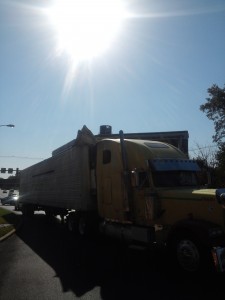 The processes of removing the trucks from under the bridge and of salvaging the trailer cargo, when it is stuck, takes hours. Unlucky commuters taking this direction will have to wait or take detours to navigate the accidents. “If you commute through here, chances are you’ve probably seen one of the truck crashes,” Jeffries said. “It can be an inconvenience sometimes.”

The warning system currently includes a set of lights near the southbound entrance and a brightly colored pattern lining the overpass. These work in conjunction with the stop lights to try and reduce the number of incidents, but their effectiveness is being questioned.

“Obviously the paint scheme is not working,” Jeffries says. He explains that lights were installed near the speed school entrance to warn drivers, which has decreased accidents going southbound, but northbound is still a problem.  “If they just put up a sign,” Cecil says. “that would help a lot.” 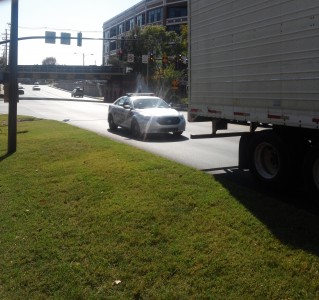 Emily Martin, a masters student, suggests placing color codes for the overpass on both the northbound and southbound entrances.

According to Drees, the University has no authority to improve the situation since the road is owned by the Commonwealth of Kentucky, who holds all jurisdiction in that particular capacity. However, even if the state were to make improvements, the state would need to work with the company who owns the railroad track, which in this case is Norfolk Southern.

Jeffries, Martin, and Cecil agree that the financial benefits of installing more signs outweigh the costs. Until then both truck drivers and commuters shall be wary of the 3rd St. and Winkler overpass. Students who walking there, will expect more traffic accidents.

Bendapudi announces classes will return on campus in the fall