Zeta Tau Alphas Morgan Ferguson and Kelly Finnell applied matching coats of deep maroon lipstick as a final touch to their meticulously planned outfits. After two hours picking out dresses and boots, clipping in hair extensions and layering mascara, the pair and their group of girl friends felt ready to go out. They weren’t going out to an upscale dinner or a ZTA formal, but to a gravel parking lot behind gate four of the Kentucky Fair and Expo Center. The occasion: tailgate.

In the lot, more than a half dozen flags and painted letters staked off territories fraternity and sorority members had claimed as their own for an afternoon of tailgating before the game against Wake Forest. Beneath the flags and pop-up tents, women dressed similarly to Ferguson and Finnell danced and drank with men wearing polos, flat-front shorts and boat shoes.

“Whenever you go to tailgate, you gotta make sure your make up is on point. You’re gonna be in bright lighting, so all your flaws are gonna show,” Ferguson said. “I had to put in my extensions, cake my face with makeup, make sure my tan looked right, picked out the right outfit, made sure I looked skinny enough; you know, typical girl things like that. It’s definitely an event to look good for.”

Freshman Clayton Amshoff agreed on the informal dress code, “Polos and dress shirts for the guys, dresses for the girls — or rompers,” he grinned. “Girls look nice in rompers.”

Ferguson admitted the dress code wasn’t just a matter of classiness for her, though. “Obviously, we have new (fraternity) pledge members, new people to meet,” she said. “Everyone’s out there looking for their Mrs. Degree. The root of it is: people wanna meet people.”

Senior and Kappa Sigma president Sam Whittaker argued the expected attire maintained informality. “At Kappa Sig, we keep it fairly casual,” he said, while wearing khakis and a UofL polo. “This isn’t an SEC school, so we’re not doing shirts and ties and that kind of stuff, but guys usually wear polos and flat-front shorts. Some people show up in jerseys and stuff, which is fine. Girls usually wear dresses, but not all the time. No dress code, as far as we’re concerned. We’re pretty relaxed on it. Normally one tailgate a year, we’ll dress up SEC style.”

Not every fraternity or sorority member adhered to the norm, though. While Finnell did wear maroon lipstick and a lace shawl, she also stayed semi-casual with a v-neck tee and jean shorts. “I feel like if you wear a tee shirt and shorts, you’re just like ‘I’m here to party and I don’t care about anything else,’” she said. “It’s kind of a Southern thing, I think. I went to a Cincinnati game yesterday, and they were literally wearing tee shirts and shorts and it was totally normal. The farther south you go, the more intense it is to look good for football games. I think it’s weird.”

The more dressed-up attire stayed mostly within the realm of sorority and fraternity tailgaters. Some non-Greek-affiliated students wore similar outfits, but had a more relaxed attitude about it. “I think people should just mind their own business and worry about what they’re wearing,” freshman Drew Smith said.

There was one rule every tailgater seemed to agree on: “no cargos,“ junior Matt Ballard said.

Finnell ardently agreed. “You mean cargo shorts? Those aren’t acceptable in any situation.” 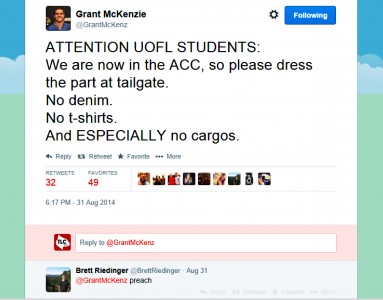 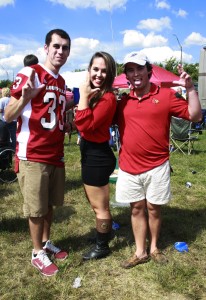 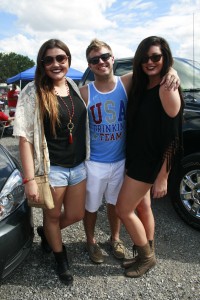