After being shut down for nearly a month, University of Louisville Dining Services announced they will reopen Panda Express before the end of the fall semester.

What Happened to Panda?

The restaurant recently had to shut down due to issues with the fire suppression system according to Lisa Ennis, the director of Auxiliaries and Asset Management.

“It had not been serviced in years and that was not under my watch. These issues could have potentially caused a fire. I made the decision to shut down as soon as I was made aware. We will have to order food and the supply chain may be our only obstacle to overcome. I assure you, we have the safety of the campus as our number one priority,” she said.

During the time of the shutdown, Nathan’s Taqueria sent their food truck to serve as a fun alternative for students during lunch hours. Their menu included options for street tacos and nachos that students could purchase for flex points, Monday through Thursday.

Even with the reopening of Panda Express, this still doesn’t fully solve the student body’s issues with more dining options and later hours. Among the restaurants on the Belknap campus, only Twisted Taco, Wendy’s, Starbucks and Eiffel Pizza are open past 8 p.m. The Health Science Campus has even fewer options, with students only being able to order Chick-fil-A and Starbucks via Grub Hub. For those in eight hour clinical classes, options can get pretty mundane.

“There are some other options nearby like food trucks and Panera, but those are not affiliated with U of L so they don’t take Flex or Swipes. The hours are also fairly limited for each option- Starbucks closes at 2:45, yet my latest class is until 3:50,” HSC senior Kaycie Carpenter said.

SGA Services Vice President Alex Reynolds and other members of the SGA have been pushing for longer restaurant hours, and have made progress in advocating for more local, health-oriented options that will hopefully debut on campus in the future. Superfood smoothie company Lueberry took the place of Cardinal Nutrition in the SRC over the summer, and dining services has been keen on showcasing both the talents of their staff through events like “Battle of the Chefs” and local vendors through “Farm to Table.”

An example of the food offered at the MarketPlace.

It was low foot traffic and lack of interest that led to the SAC MarketPlace’s hours being shortened from 8 p.m. to 5 p.m. “We averaged 10 people eating at the MarketPlace after 5 p.m. It is not sustainable to keep it open through the evening. Students are eating in other places,” Ennis said.

Dining services had previously announced on August 8th that the MarketPlace was changing its format from a normal meal swipe exchange per restaurant station to a more residential, one-swipe-to-go option, similar to a buffet. Many students on social media were apprehensive about the change, noting that The Greenery, which replaced the popular EverGrains, just didn’t have the same appeal.

Quality speaks more than quantity, in this case. If you have the chance to go during normal, busier hours the variety of food gives you plenty of things to fill up your plate. However, since most of the food tends to sit in those wide chafing dishes, some of the meat and vegetables can get pretty dry if not routinely replaced.

Students care about where their money goes, and so the communication between dining and its vendors has to reflect that. If you’d like to learn more about U of L dining and its services, you can do so here. 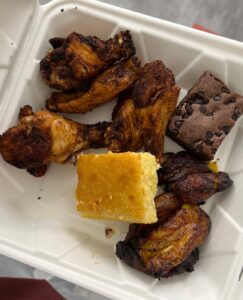 Wings, cornbread, fried plantains, and a brownie from the MarketPlace.