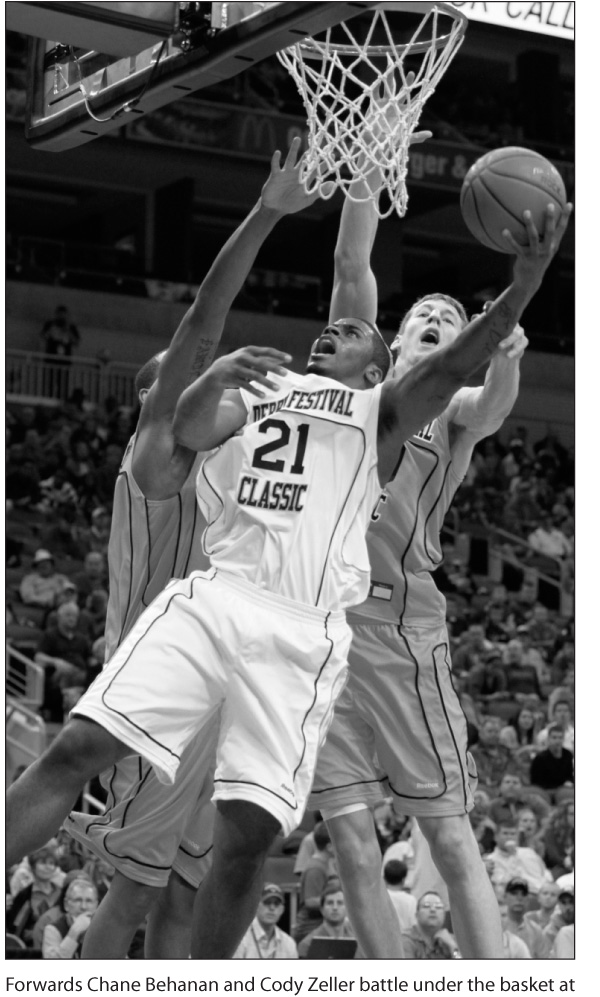 Some of the most talented freshmen in the incoming 2011 recruiting class were on display Friday, April 22 at the KFC Yum! Center in downtown Louisville for the 39th annual Derby Festival Basketball Classic. Several University of Louisville commits – such as forward Chane Behanan, forward Angel Nunez and center Zach Price – impressed the crowd.

The three future Cardinals are part of a star-studded recruiting class put together by the Louisville coaching staff for the 2011-2012 season. This recruiting class also includes guard Wayne Blackshear, who did not get a chance to play in the Derby Classic because of shoulder surgery.

The Cardinals’ next wave of freshmen flexed their talent and put on a respectable performance in front of a crowd of just over 10,000 in the Yum! Center. In addition to putting up 11 points, Behanan grabbed 11 rebounds. Nunez netted 16 points for White, as well as pulling in 5 rebounds and dishing out 2 assists. Price finished with 6 points and claimed 10 rebounds of his own.

However, the future Cardinals’ play was a bit overshadowed by teammates Nash and Bello, who had 19 and 20 points, respectively. These two seemed to thrive in the high scoring and often hectic atmosphere of the game. Nash also finished with 6 rebounds.

As for U of L prospect Kevin Ware, the undecided guard contributed 8 points to the White team. Guard Trevor Lacey, a University of Kentucky prospect, had 5 points for the Gold team.

The Gold team was up by a score of 70-59 at the half. The halftime festivities included the 3-point and dunk contest finals. Guard Aaron Cosby, a Seton Hall University commit, forward Austin Etherington, an Indiana University commit, and undecided guard Anthony Hickey competed in the 3-point contest. Cosby went on to win the contest.

Following the 3-point competition was the dunk contest finals. The finalists included Nunez, Bello and Nash, along with guard Levi Randolph, a University of Alabama commit. Randolph won the contest with consecutive scores of 36 and 40. Nash’s dunks may have won over the crowd, but not the judges.

The White team rallied in the second half, briefly taking over the lead. This was largely due to guard D’Angelo Harrison, a St. John’s University commit. Harrison hit several big 3-point shots. The Gold team quickly fought back with a full court press and managed to reclaim the lead in the game’s final 62 seconds. The Gold team went on to win the game, 126-122. For his important contributions to the Gold team’s victory, Zeller was named MVP for the Derby Festival Basketball Classic.