Since 1856, Louisville Male High School has had an athletic legacy that extends past Preston Highway, to a school 10 minutes away: the University of Louisville.

Selah Brown, class of 2022, and Kaleb Glenn, class of 2023, are two athletes  attending Male and looking forward to continuing their athletic career as “Hometown Heroes.”

Both have expressed that they would like their legacy at Male to be left as one of the “greatest” football/basketball players to walk through Male, and have worked hard to both earn this title and continue it at Louisville.

Kaleb Glenn: One of the “Greatest to Ever Play at Male” 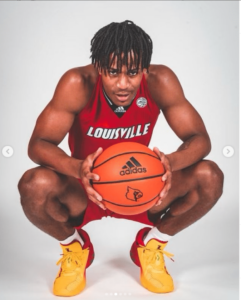 U of L commit Kaleb Glenn, from his Instagram

Tim Haworth, Glenn’s former basketball coach, said “[The] sky’s the limit for Kaleb. He’s one of the most humble and hardworking kids I’ve ever been around.”

Haworth had met with Glenn before and after school every day this year, bringing in trainers or personal coaches to work with him. Haworth is dedicated to coaching Glenn, saying he is going down as one of the greatest to ever play at Male.

Haworth also believes Glenn has a chance to be an NBA player one day if he keeps working as he does. Glenn himself has similar goals while at Louisville, hoping to get better while enjoying his time and then hopefully get drafted.

Glenn values hard work and it is one of the things he prides himself on. One of his biggest role models is the 2021 Finals MVP and 2021 NBA Champion Giannis Antetokounmpo of the Milwaukee Bucks because he is a good guy that values hard work. Glenn hopes to inspire people to work hard and is excited to continue this legacy of work ethic at Louisville.

Selah Brown: “The Next Chris Redman From the Defensive Side”

Selah Brown has similar goals at Louisville, where he hopes to rep Louisville across his chest the best way he can. This includes both on and off the field. He wants not only an academic degree but also an ACC championship during his time at the university.

Chris Wolfe, Male’s head football coach said, “Selah is probably one of the most inspirational players that I’ve coached, as far as the

U of L commit Selah Brown, from his Instagram

When talking to Chris Redman, he said Male was a great school to prepare him for Louisville. Redman is the third generation in his family to play football at Louisville, valuing this legacy of growth for the Louisville football program. In attending both Male and Louisville, Redman created valued relationships with his classmates, teammates, and coaches.

Continuing at U of L

Redman described the special relationship between college athletes who choose to stay in their hometown and their fans. “Fans appreciate athletes continuing their career in Louisville,” he said. “Utilize all the help and opportunities there.” This is something both Glenn and Brown have expressed excitement for.

Both Brown and Glenn value family-oriented programs and strong relationships, which is one of the main reasons Glenn chose Louisville. “Going into the recruiting process, I was open to everyone, but Louisville was that school that built a great relationship with me,” he said.

As Glenn continues to develop his relationship with the new head coach, Kenny Payne, he said he likes what he [Payne) brings to the table.

Brown and Glenn, like Redman and many other Male Alumni before them, are continuing on the transitional legacy that dozens of student-athletes take from Male High School to the University of Louisville.

The tradition is likely to be continued, as several underclass prospects at Male are also considering Louisville. It will be exciting and interesting to watch their journies.

Editors Note: This story was written in collaboration with the students of Louisville Male High School. More stories from their newspaper can be accessed here.