“My first instinct was, ‘I just need to get out of here.'”

One night in Old Louisville, blocks from campus, Jessica almost became a victim.

A U of L alumni, Jessica had never been the victim of a crime, but she knew some victims – her neighbor was once held at gunpoint. She moved to the area this summer, well aware of the dangers surrounding campus. That night, she went to Kroger, returning to her Old Louisville apartment around 10 p.m. As she turned down the alleyway towards her apartment, she noticed two men walking in her direction.

“They were kind of looking around…they just looked a little suspicious,” Jessica said. “I thought that I might just be being paranoid, because it’s late and it’s Old Louisville and everyone knows they should be careful.”

Before Jessica could park her car, the two ran to the car, grabbing the door handles and yelling to get inside. She quickly reversed from the spot and sped from the scene, glancing at her rearview mirror to see the pair attempt following her.

“They were still yelling at me. I don’t really know what they were saying – I didn’t really stick around to find out. But it was definitely a really scary situation because they did approach my car and they did try to get in.”

That was in early September. Weeks later, U of L was shell-shocked by multiple violent crimes in Old Louisville. By the time three suspects were arrested, two women were robbed and two more sexually assaulted. One of the victims was a student.

They are a few of the cases in U of L’s twilight zone, the overlapping jurisdictions delineated between campus police and Louisville Metro Police. Bogged by occasionally choppy communications, conflicting duties and contrasting security agreements, students caught in the middle are left endangered.

On campus, ULPD have a strong record of deterring crime.

In 2015, there were five motor vehicle thefts, three burglaries, three stalking incidents, one incident of domestic violence, one robbery, one aggravated assault, two arrests for drug abuse violations and hundreds of referrals for drug abuse and liquor law violations.

“Consistently, our problems are thefts, and we average a little under 200 a year, and that’s book bags or books that are left unattended and someone walks off with it,” ULPD Chief Wayne Hall said. “It’s a very safe campus.”

The assaults were irregular for multiple reasons. First, the abductions happened within days of each other with the same motivations and suspects. Second, it happened in midday – shattering safety’s daytime allure. Lastly, suspects abducted the student from outside her apartment complex – blocks away from campus.

Students were disenchanted with campus security. Choppy communications impeded action, as LMPD did not tell ULPD about the student’s sexual assault until a day later. Communications continued to lag, as LMPD reported the arrest of the first suspect three days late.

While increased patrols remain on the north side of campus, violent off-campus crime continues.

With an estimated 83 percent – more than 13,000 people – of undergraduate students living off campus or commuting in 2015, worries abound.

Some off campus locations, like The Bellamy and The Province, don’t operate on contracts with ULPD. In those cases, the LMPD fourth division, tasked with covering around campus and Old Louisville, responds. But when The Nine, The Clubhouse and Cardinal Towne properties need security, ULPD dispatches one of its 45 sworn officers. ULPD Sgt. Steve Green is one of those officers.

Green’s campus police badge shines under the glow of passing street lights. A blood red ring emblazons the center of his badge, bearing U of L’s Minerva brand. His cumbersome police scanner sprawls across the passenger seat, buzzing with a report: a stabbing and break-in within the city. Behind his barred car windows, a defibrillator, first aid kit and traffic cones guard a black box wielding an AR-15 rifle. A Louisville native, his husky voice, jovial laugh, baldness and demeanor are reminiscent of “Breaking Bad’s” Dean Norris, who plays a drug enforcement agent.

Green joined ULPD after almost 23 years with LMPD, with 12 years in the narcotics division chasing drug dealers. He’s not the only LMPD recruit. Green said ULPD officers carry service histories in the military or LMPD.

“Most of us here, probably 85 percent of the officers here, have retired from LMPD,” Green said.

Green retired from LMPD last year, trading his police badge for the ULPD crest and a mess of keys. As a district resource officer, Green monitors housing units around campus. LMPD courtesy officers sometimes respond to the apartment calls, living in affiliate housing under security contracts. The Arch, The Province and The Retreat have such officers.

“It just takes seconds,” Green said. “And then pretty much, I wouldn’t say her whole life is ruined, but that’s going to be with her forever.”

Hall has not announced plans to increase the security force in light of off-campus crime. But, ULPD beats LMPD officers on and near campus in response time. ULPD, tasked to cover campus, affiliate housing and up to two blocks from campus in emergencies, have averaged a response time of five minutes and 29 seconds this year. Their longest time reached above eight minutes.

LMPD’s fourth division, which covers campus and Old Louisville, averaged nine minutes and 35 seconds. In some cases, LMPD passes calls to campus police, freeing them to respond to other calls.

“So any run that comes here, even if LMPD gets dispatched, LMPD’s going to say, ‘That’s on ULPD, dispatch it to them.’ Because they don’t want to come here, because they’ve got enough problems as it is,” Green said.

District six Metro Councilman David James used to work for campus police. James said off-campus crime has been a constant problem for U of L, but ULPD coverage combats it.

Along with quick response times, campus police have a hefty budget. $3.8 million of the vice president of business affairs’ $8 million budget went to public safety, which added four patrol and security officers in 2014. The University of Kentucky, more than double the acreage size of U of L, spent $4.2 million on their campus police. 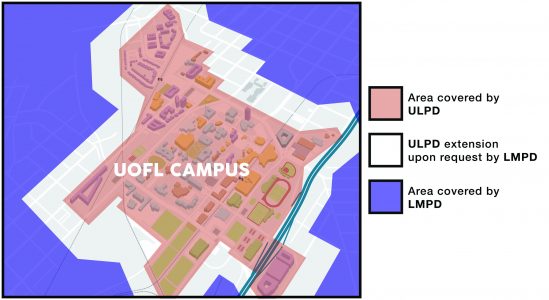 Following her scrape with crime, Jessica admits she still looks over her shoulder. As an alumni she no longer receives Rave alerts and relies on news from friends. While she has seen more police presence in Old Louisville, she says more officers would help.

“I think anything to keep that area more contained and safe would be a good thing,” Jessica said. “Whether it is extra patrolling or extra officers or a combination of the two, I think it’s necessary because there has been the crime. It’s really unfortunate because you want the students and the surrounding neighbors to feel safe in that area.”

In the meantime, students surrounding campus remain endangered. For students crossing into U of L’s twilight zone, police say bring a friend.

“That’s always good practice to walk in groups or at least pairs,” Green said. “Especially if you’re going to walk off campus.”

Disclaimer: Jessica, previously a U of L student, did not wish to use her full name.

About the Author: Kyeland Jackson

Editor-in-Chief at The Louisville Cardinal.