A frame from one of Griffith’s beehives

Beeing2gether, a local business that focuses on raising honeybees, is the brainchild of Keith Griffin III, a Louisville teen who started the business with his uncle and mother. The 15-year-old was creating quite a buzz during the Engage Lead Serve Board’s “Bee Green” event, in which he demonstrated his knowledge of beekeeping and environmental awareness.

For example, depending on how busy the bees are, a sugar spray or burlap-fueled smokers are used to check for varroa mites on the drones in the colony. Beeswax is regularly used for purifying air, too.

Griffith and his family do regular beehive upkeep in the area. By contacting him, customers can actually host a hive, learning how it’s maintained. The business started due to Griffith needing a creative outlet to help his mental health, and he and his family have partnered with local beekeepers and farmers in the area to promote more about bees and their benefits to the city.

The Shea and Honey soap from beeing2gether; oatmeal and donkey milk soap are also available to purchase from their site.

“Spread the word about the honey bees; naturally when there’s a bee there’s a hive somewhere. If you just go about your business, the bee is focusing on that flower or plant. We just encourage everyone to not swat at them,” his mom said. “I know people want beautiful yards, but the bees actually take care of your yard. If they’re coming to visit, they’re going to bring the sprayed stuff back to the hive, destroying it.”

The honey Griffith produces, by the way, is spectacular. The jar has a very light, floral taste; it’s very smooth and almost syrupy in consistency. I can tell you firsthand it’s great in iced coffee or tea. Cookies made with the honey were also included during the presenntation, with sophomore Ashton Beckham describing them as “light and sweet, but not sweet like sugary”. 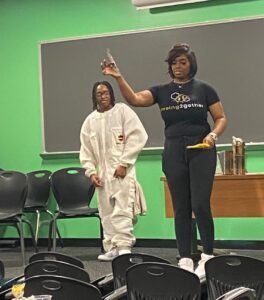 Griffith (left) in a beekeeper suit, and his mom (right)

The Shea and Honey soap left my skin feeling refreshed and smooth, not tacky and dry like some other bars of soap have. Natural honey is known to have moisture sealing benefits, and Griffin’s uncle recommends a dab if you have a cut – Griffith even used to take a teaspoon before bed to help with allergies. “I used to get 2 allergy shots in each arm, but after doing it for a month, it’s kinda down to 1,” he said. “But to be fair, I hate needles in the first place.”

Their online shop not only has honey and soap available to purchase, but also body butter, lip balm and “Honey Bees and Beekeeping, a Mental Health Miracle” written by Griffith himself. Most of the products can also be found in locations across the city, including Rainbow Blossom and Blue Dog Bakery.