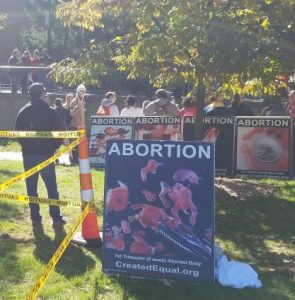 Whether you’re pro-choice or pro-life, every young person at the University of Louisville and across the state of Kentucky is impacted by the decisions being made in Frankfort right now.

Lawmakers in our capital have a strong anti-abortion agenda for the upcoming year. Efforts to shut down the Planned Parenthood clinic in Louisville failed to pass during last year’s session.

This time, Republican lawmakers in both the House and Senate have filed bills which would prohibit abortions if a fetal heartbeat is detected. This is usually around six weeks into a pregnancy.

Most women are unaware of their pregnancy until after the six-week mark. This will make abortion effectively impossible in the state of Kentucky with the implementation of this bill.

Sponsors behind House Bill 148 and Senate Bill 9 hope to pass their bills into law with the intention of taking it to the Supreme Court and overturning Roe v. Wade.

Abortion has remained a hot topic among politicians and the public due to the long-standing debate: when does life begin?

Senate Bill 9 sponsor Sen. Matt Castlen, R-Daviess County, outlined the purpose for SB-9 in conjunction with his stance on abortion at a press conference Thursday. “The purpose is to make it illegal to abort a baby once a heartbeat is detected because a heartbeat represents life,” he said.

Opponents say that a fetal heartbeat law is unconstitutional because the Supreme Court has consistently ruled that states may not ban abortions before the point that a fetus could survive outside the womb, or before about 24 weeks into the pregnancy.

In addition to the moral debate surrounding abortion, there is the issue of deciding to what degree can the government legislate women’s personal health care and medical choices.

Politicians who know nothing about these women or their circumstances are trying to legislate what they can do with their bodies. It doesn’t get any more personal than that.

With an issue as polarizing as abortion, every young person should be conscious of the current political climate and willing to have honest and open discussion regardless of their stance.

The decisions being made in Frankfort are directly impacting women. Abortion legislation also impacts men as potential fathers, regardless of whether or not it is their body at stake. The issue will be just as important in ten years when many of us begin thinking about whether or not we want to start a family.

Hot-topic political issues like this present the perfect opportunity for young people to voice their opinions. An issue as important to every single one of us as this one deserves our attention and participation.

Make sure your voice is heard.

Students should get involved to find their college family

Vote for a better future, not the candidate