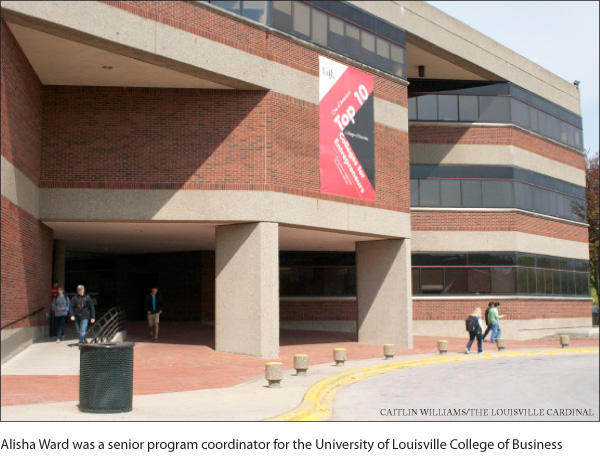 On Feb. 22, the University of Louisville fired an employee of the College of Business after she was alleged to have misappropriated university funds.

Alisha Ward, a senior program coordinator for the Equine Industry program, was dismissed after having worked at the University of Louisville since 2007.

University Police have begun an investigation into the case. Major John Schaffer of the U of L Police said that their findings would not be released while the investigation is in progress.

According to U of L spokesman Mark Hebert, it is not yet known how much money was taken.

“We’re looking into it,” said Hebert. “We want answers too.”

The university is conducting an audit of the equine program to identify the amount.

Hebert said that the case would ultimately be turned over to prosecutors once the university has concluded its investigation.

Ward is the third U of L employee to be fired for allegedly misappropriating funds within the calendar year, including former dental school professor, Michael H. Martin.

Martin was questioned in connection with the misuse of funds allocated for a grant. Martin was found dead in his office after being questioned by University Police.

Susan DeWitt, former chemistry department unit business manager, is currently serving a 3-year prison term after being convicted of stealing from the department.

“I just feel like the university should do a better job of making sure this doesn’t happen,” said junior marketing major Tony Ausick. “This is the third person. [The university] should definitely have better guidelines.”

According to Hebert, this cluster of thefts was partially caused by lax supervision.

“Supervision is a part of it,” said Hebert. “Two, there’s opportunity. Third, there are always going to be some people who do bad things. The problem with the university setting is that most of them are educated and can figure out a way to do it without getting caught.”

While the current criminal investigation only involves Ward, Hebert said that other employees might face consequences as well.

“If supervisors are found to have been lax or if other employees are somehow involved, they’ll face disciplinary actions ranging anywhere from reprimand to firing,” said Hebert.

To ensure that similar incidents don’t happen in the future, Provost Shirley Willihnganz has called on the U of L department deans and vice presidents to reassess their standing safeguards.

The College of Business, being the most recently affected, has already begun to strengthen their security measures.

“We’ve done a number of things,” said College of Business dean, Charlie Moyer. “All the financial controls are in place.”

Moyer declined to comment on the specifics of the new security measures until the current criminal investigation of Ward is complete.