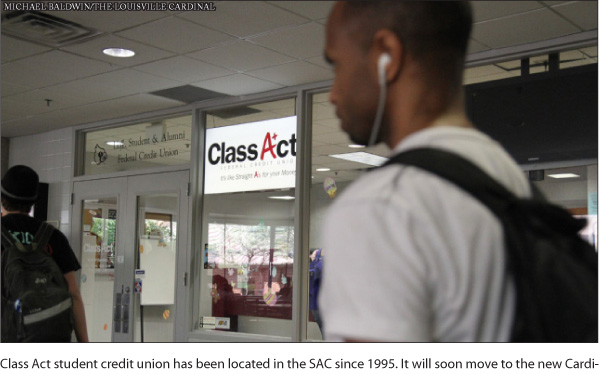 What do 15 students and a shoebox of change make?  It made up the first student credit union at the University of Louisville.

Class Act Federal Credit Union based its business on the principle of education and began looking to put a branch on U of L’s campus in 1995.

After 16 years in the Student Activities Center, Class Act is now making a move out of the SAC and into a new location. The move has been in the works for quite some time, as Class Act has had plans for expansion in both space and business.

“We’ve been in that location since 1995,” said Tom Anonson, executive vice president of Class Act. “We’ve noticed how things are migrating towards the west side of campus.”

Class Act will be moving into a space in the first floor of the new Cardinal Towne apartment complex. This new location offers an opportunity for Class Act to provide a more central location for all its education-oriented clientele. Students from the Medical, Dental and Speed Engineering schools, as well as U of L alumni and local high school students will find the new location advantageous.

“We serve the students well,” said Anonson. “However, we’ve always had the problem of people getting to the branch.”

According to Anonson, the new facility will not only bring a more central location to clients, but will also increase the capacity for more business and improved technology.

“It’s doubling our space,” said Anonson. “It’s going to be a state-of-the-art facility.”

There will also be a new Class Act ATM in the SAC on the first floor, which will be the only surcharge-free ATM on campus.

The move will take place after the spring 2011 semester and the credit union will be temporarily located in Room W314 of the SAC from mid-May until August.

Following the migration of Class Act to Cardinal Towne, an open space will be made in the SAC.

“It has presented us with opportunities,” said David Martin, director of purchasing for U of L.

It is still unknown what type of opportunity will open at this point. However, there has been rumor among some officials that Chick-Fil-A will move into that space.

According to Martin, this isn’t true.

“We’re looking at a lot of different options,” said Martin. “Nothing is final yet.”

The decision of what will be going into this space is one that directly affects the students of U of L. Thus, the Student Government Association at U of L is participating in these discussions.

“We all try to do talking with the students,” said John Weber, the services vice president of SGA and a junior political science and philosophy double major. “[We’ll] see what they want. We will definitely represent the student voice.”