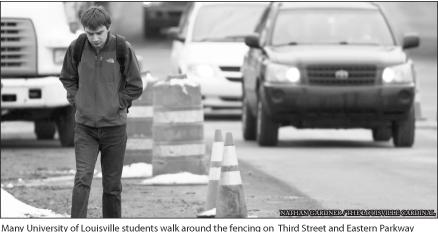 Because the University of Louisville is always renovating and upgrading facilities, students have been forced to adapt to living with construction. Students have adapted to find new routes around the construction to reach their destinations.

Recently, due to concerns about student safety, pedestrian access around the construction site at Third Street and Eastern Parkway has been suspended until construction is complete.

“The simple reason is student safety,” explained John Drees, U of L spokesman. “There were instances where students were having to walk basically down the middle of the road, and obviously that’s unsafe.”

The sidewalk closure has been a major obstacle for Speed School students, due to the close proximity of the J. B. Speed School of Engineering to the construction site.

“When I’m going to Sackett Hall, or any of the other buildings over there, I definitely have to plan to leave a little early,” said Julie Conrad, a freshman bioengineering major. “The problem now is that there are still some students who walk around the construction and even kind of cut into the construction area, which is dangerous because cars drive pretty fast on the Eastern Parkway.”

Although the university has taken measures to ensure there are safe alternate routes to classes for all students, it will be important for students to plan accordingly for these construction closures. Students should leave a few minutes earlier for classes and go to the areas affected to become familiar with new routes.

According to Drees, there are plenty of alternative walkways, which will be marked very clearly with signage so that students can still navigate campus freely and get to class on time. The affected sidewalks and walkways will also have signs indicating they are closed. Furthermore, all affected paths will be fenced off to ensure no pedestrians cross at those points.

Students should also be aware of one additional sidewalk closure taking place in the near future. The sidewalk by the parking area surrounding the Engineering Graphics building will be closed for utilities work, in addition to the previous closings. This closing will also incorporate signs to guide students along alternate routes to class.

Students who take the Cardinal Shuttle to stops along the closed routes will need to plan ahead even more, to make sure they have enough time to walk from their temporary TARC stops to class. The Cardinal Shuttle makes several stops around campus, so students should have plenty of opportunities to find a shuttle, despite the closures.

While this is the most recent of the university-centered construction projects, it is not the only one. Several other construction sites have popped up on and around the Belknap Campus, including sites near the George J. Howe Red Barn, the Miller Information Technology Center and The Playhouse, in addition to the construction on Cardinal Towne, at the former Masterson’s Catering site. According to the U of L 2020 Plan, there are more to come.

“Future university investments close to campus will greatly improve property values and opportunities for commercial business development,” reads the 2020 Plan. “This area has already seen much improve­ment in recent years due to U of L investments in projects such as converting the Reynolds Build­ing, an historic four-story struc­ture at the southwestern corner of Belknap Campus, into upscale loft condominiums.”

Although the construction may cause inconveniences for U of L students, the university says that it is for the greater good.

“It is this type of innovative think­ing that is helping our partner­ships become win-win situations for the university and its collabo­rators, as well as for the city and state,” reads the 2020 Plan.