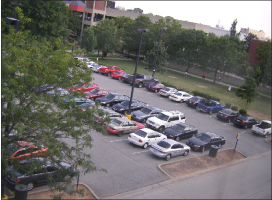 Dustin Delaney will be riding his bike to the University of Louisville campus this fall as increased parking permit prices have forced him to consider alternate modes of transportation.

“If you buy a green pass, you are not guaranteed a green spot,” said Delaney, a senior mechanical engineering major. “Every semester it seems like we lose more parking spaces.”

Students have said they are upset not only about rising costs, but also new parking requirements, such as students now needing 90 credit hours to purchase a green pass instead of the previous 60.

“It seems like U of L rushed to come up with a new parking system without consulting SGA or the student body in any kind of forthright manor,” said senior English major Jordan Tomaski.   “Parking is already a problem and their new system is already causing students more headaches.”

Kaylie Henderson, a junior biology major, said, “It would have been nice if the university had been clearer about the parking rates. This is the second time I’ve been [at the University Parking Office] because I couldn’t afford the new pass.”

According to Vice President of Business Affairs Larry Owsley, strides are being made to provide more available parking. Owsley said the university does have a long-term parking plan which has been undergoing construction since May of this year.

Owsley said that future housing facilities currently being developed will give a big boost to campus parking.

One facility, equipped with 859 beds, will have its own parking available and will also offer 600 extra spots for U of L permit parking in the future.

Owsley also said that parking improvements are being made on the Health Sciences Campus as well, with a new garage scheduled to be completed in November, 2009. The garage will contain 1,700 spaces, 1,100 of which will be available in August, 2009, with the remaining 600 to be completed by November of that year.

Owsley also said that the shuttle system on Belknap campus has been improved for this year and should make things run more smoothly for commuter students.

“We have added an additional bus to the line this year and we are shooting for a schedule that runs every 4 to 5 minutes,” Owsley said. “I think we’ve gotten off to a good start this year from what I’ve observed.”

Some students, however, have voiced concerns about the shuttle system, in particular the lack of a late-night shuttle.

“I am often forced to park at Cardinal Stadium and many times get there after the shuttles have stopped running. It’s not a fun walk back to campus from the stadium at 11 p.m.,” said junior chemistry student, James Fenderos.?

And despite what Owsley calls improvements to the shuttle system, Delaney said that they don’t make the parking situation any less inconvenient for students.

“Yes, there is adequate parking, but not enough convenient parking,” Delaney said. “The university is more concerned about building more buildings.”

New Executive Director of the Center for Digital Transformation appointed

All issues of The Louisville Cardinal digitized