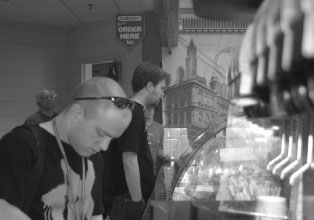 Attention orientation students: although Wendy’s, Papa John’s, and Subway may be the only food options open during your stay, they are by no means the only ones offered by the university.

“A lot of students just look at the SAC as the only place where they can eat and they get sick of that after a month,” Spencer said. “You can piece together a good variety just by examining all of the different options.”

If students browse about the campus, it is possible to find several different options available in the fall.

On the second floor of the SAC, there is the Terrace food court comprised of a Chick-fil-A, a sushi café, as well as eateries serving Mexican and Italian foods. This food court is open from 7:30 a.m. to 2:30 p.m. during the school year, serving breakfast and lunch.

Other food options include the Halftime Grill, also located on the second floor of the SAC, Mitzi’s Café on the bottom floor of the Miller Information Technology Center, the Tulip Tree Café on the second floor of Ekstrom Library and the Cardinal’s Nest on the bottom floor of the University Towers apartments. For the hours on these dining locations, visit www.dineoncampus.com/louisville/index.cfm?cmd=menus. For directions to these buildings, see page 12 for a campus map.

For students seeking more variety, there are several other food options within walking distance of campus. Night owls might be taken with the combined Taco Bell and Pizza Hut on South Floyd Street, near Cardinal Blvd., which keeps its drive thru open until 3 a.m. Sunday – Thursday and until 4 a.m. on Friday and Saturday. There is also a 24-hour Denny’s at the corner of Crittenden Drive and Eastern Parkway, which also provides free Wi-Fi internet access to its customers.

Another option is the Bearno’s Pizza on Fourth Street just next to Gray’s Bookstore, which offers a 15 percent discount to U of L students, as long as they can produce an ID, on all meals excluding the buffet.

The university is also currently reviewing the contract of its current food service provider, Chartwells Dining Service and proposals from different food service providers as well. According to Risk Management Director Sonny Altman, this review process will take one to two months and the university cannot reveal any new information until then. Chartwells director Melissa Pompa was unavailable for comment.

Spencer said the current review process is looking at different ways to revamp food service on campus. He thinks this process is a good way of challenging Chartwells to come up with new solutions.

“Other food service companies as well as Chartwells are being given the chance to come back to the table and put forward something different,” Spencer, a junior political science and communication major, said. “A new look at food services can only make things better.”

“I would tell an incoming student to spend wisely so as to have a surplus rather than too little on their card at the end of every semester,” Frommeyer said.

On this end, some incoming residents may be confused as to how their meal plans work. According to Housing Director Shannon Staten, a meal plan is required for all residents not living in University Tower Apartments or Bettie Johnson Hall, where they have kitchen facilities. The cost of the plan is $995 for a first year freshmen and $560 for a returning student.

Staten said a student will spend this money over the course of the semester and any money left at the end will be rolled over into the next semester. The meal plan can be used at any of the food facilities on campus.

The current rates have been raised from what was in place two years ago. Staten said this hike was made in order to accommodate the requests of students.

“Students had been requesting for quite some time to have longer hours in many of the food venues,” Staten said. “By increasing the rate, we were able to staff the areas for longer hours to meet that need.”

For more information on meal plans or dining services in general, go to www.louisville.edu/contractadmin/dining/meal-plans.html.