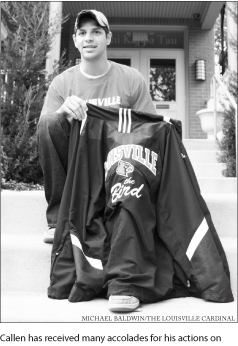 On the night of Tuesday, Nov. 16, Michelle Westbay was on her way home from watching the University of Louisville men’s basketball team triumph over Butler University. At 11:52 p.m., she took the ramp from Interstate-65 South to the Watterson Expressway and lost control of her car, crashing it into the stone wall on the side of the ramp. Westbay survived, but her car doors were rendered inoperable. Trapped in her car without a cell phone, Westbay feared for her life.

“The whole experience was horrifying,” said Westbay in an e-mail communication with The Louisville Cardinal.

Luckily for Westbay, Keith Callen was close by. Callen, a junior sport administration major and Cardinal mascot for U of L, saw the accident and pulled his car off to the shoulder of the ramp. According to Callen, he then told his passenger to call 911, while he safely pulled Westbay from the driver’s side window of her car. After Callen removed her from the vehicle, Westbay told him she had diabetes and that her blood sugar was low.

Seeing that Westbay was wearing a U of L sweatshirt, Callen quickly told her of his position as mascot at U of L. According to Westbay, knowing she was in the care of her team’s mascot helped her to remain calm until the ambulance arrived.

“There could not have been a better person come to my rescue,” said Westbay. “He knew exactly what to do and say to save me and calm me down.”

According to the Metrosafe Emergency Management Agency, the Emergency Medical Service ambulance arrived eight minutes after the accident, at 12 a.m. Callen stayed with Westbay until they arrived on the scene.

Following the accident, Callen has received a large number of Facebook messages thanking him for his act of heroism.