U of L to archive more than three million images in Bingham family, Courier-Journal donation

The University of Louisville is now in possession of the Barry Bingham Jr. Courier-Journal Photo Collection, Interim President Lori Gonzalez and the CJ announced in a press conference on Sept. 26.

“This event marks a big deal, a significant deal on several levels. This is a significant gift. Truly, a gift of history,” C. Thomas Hardin, former director of photography for the Courier-Journal said. And indeed it is- images in the collection date from the 1930s all the way to the early 2000s.

The Courier-Journal, in partnership with its parent company Gannett, is donating the newspaper’s library of photos and negatives to be archived in the U of L Photographic Archive. The collection shows not only photos and prints of everyday life but important historical images from events during the Civil Rights movement, presidential visits, numerous public images, and behind-the-scenes appearances of celebrities, including Louisville’s own Muhammad Ali.

Those from former publisher Barry Bingham Jr.’s family, including daughters Emily and Molly, made a separate donation to help preserve the photographs for public use.

A march done in response to racial busing in Louisville, 1975.

U of L photo archivist Elizabeth Reilly estimates for there to be about three million images- a combination of prints, negatives slides, sheet negatives, and slides. While the intent is to eventually open up the archives to the public, every image has to be digitized, scanned, cataloged, and then placed in expensive, climate-controlled storage, making the process lengthy.

“[The collection is] a treasure trove of images that document every event in the 20th century. What’s most notable is the capacity for scholarship and creative expression these images represent,” President Gonzalez said. 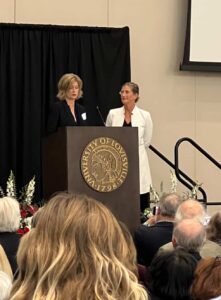 The Bingham family owned the Courier-Journal from 1918-1986. The Courier-Journal has won 11 Pulitzer prizes throughout its history, including two during Bingham Jr.’s tenure- in 1976 for photojournalistic coverage of racial busing, and one in 1980 for international reporting on Cambodian refugees.

Bingham Jr. was known to have set a high standard for photography during his time with the Courier Journal. Many former CJ photographers and writers talked about how he prominently displayed his favorite prints on a big board outside of his office, and how he was among the first to digitize his own emails, photos, and letters.

“There’s no better way to honor his enduring legacy than by securing this brilliant historical collection by such talented journalists- I’m sure he’s smiling up there somewhere twirling his fabulous handlebar mustache,” historian and daughter Emily Bingham said.

There are currently 40 images available to view here. To make a contribution or for more information, contact Denise Bohn, [email protected].