By Jocelyn Kronoveter and Gabriel Wiest–
Voting for the Student Government Association election began Feb. 18 and ends Feb. 20. The candidates for the top four spots spoke at a Feb. 13 forum at the Chao Auditorium.
The Cardinal gathered these quotes from the 2019-2020 candidates.

Presidential Candidates
Dion Copeland is a sophomore Education major.
“I’m proud to be one of the presidential candidates for this years campaign. I am the college of education and human development president, an SOSer and Vice President of Shades,” an LGTBQ organization. “I have a lot of experience working with many different students from diverse populations and various backgrounds and I appreciate all the of motivation and support in my campaign to become president.”

“One of my goals is to increase campus security and having more guards on campus,” he said. McGinty said he wants more security cameras and better lighting on campus. He would also strengthen mental health support by providing more counselors to cut down on wait times. “I would like to have weekly meetings with President Neeli depending on what issues we’re focusing on. I plan on getting more involvement at sporting events and getting more people involved at RSOs and Greek life,” he said. “The more people are involved the more likely they are to wear a campus shirt and be a proud cardinal”

Jasper Noble is a junior Political Science and History major.

“I don’t think it’s an exaggeration at all to say the university is emerging from a crisis, and I think the passion and vigor in which we have emerged from this crisis is exceptional,” Noble said. “The leadership that we have now is trying to make serious positive change on this campus and is doing a great job, but the only way they will actually continue and follow through with all the promises that they’ve made is if we have representation that understands what all the students need and how we can make campus work for everyone.”

“I believe this position suits me the best because I am wholeheartedly invested in supporting students through diversity initiatives, through platforms that have any number of ideas that have to do with things such as access to mental health resources, access to affordability and issues such as dining and housing. Diversity is a really big part of my platform, but I am an advocate for all students,” she said. “The issue is that students of color are not represented on campus, I can’t preach or point that out enough, it is a very difficult conversation to have. It has to do with how we are incorporating them at the beginning, we need to give them more resources so that they know what they can get involved in.” 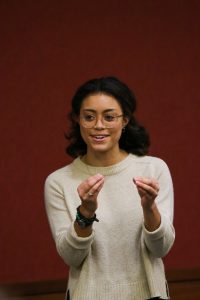 Curtis McCoy is a junior Physical Education and Health major
McCoy did not speak at the SGA debate and has no responded to Cardinal emails for comment.

Academic Vice President Candidates
Sabrina Collins is a sophomore, Arts and Sciences major
“Marginalized students on campus don’t feel comfortable in the classroom, and if you don’t feel comfortable that is going to hinder the way you learn. For example, gender language in syllabi makes trans students and non-binary students feel very uncomfortable learning in the classroom because it is clear to them that the professor isn’t creating the course with them in mind,” Collins said. “Students have come to me with issues, and I sit down with them and talk about ‘okay, what can we do to solve this problem?’ “
Cash Collins, Law Student
“I’ve seen U of L and SGA achieve great things, but there is still progress to be made. Now that state funding is tied to academic success, U of L must do more, we must invest in online classes, we must invest in diversity initiatives, we must invest in classroom infrastructure,” Collins said. “Retention is notoriously difficult problem, there is no easy answer. Rather, it takes a multilateral approach to tackle it. Students succeed when we are excited and proud to be in a classroom, we succeed when we have all the information, we succeed when we feel like we belong.”
Jensen Smith is a sophomore Biology and Chemistry major
“I want to get students more involved and more comfortable in the classroom setting that they’re in. Another issue that I want to try and start up is I want to increase the intersectionality of the academic programs,” Smith said.
Zach Pennington is a sophomore History and Political Science major.
Pennington says he wants more courses to count towards cardinal core requirements. “I agree with the other candidates, retention is a huge issue, especially with at-risk populations. I cannot speak for the thousands of other students and know what is going through their head, so reaching out for students in those groups and asking them ‘hey, what would help you stay at the University of Louisville? How can we bring you more into this community that we have?’”
Molly Baldock is a sophomore Political Science and Finance major.
“Retention is one of the biggest issues that the vice president deals with, our numbers are down and we need to figure out why,” she said. “As a finance major and being in the College of Business I believe I am specifically able to tackle this, looking at the numbers and seeing which groups are falling behind and which groups are coming back; looking at minority students and seeing how that applies and looking at ‘at-risk’ students and so I really think that it takes an analysis and looking at the numbers and deciding what is best to do from there.”

Will Baird is a sophomore Accounting major.

“Services is such a broad and fantastic vice presidency to run for, I think that the effectiveness that vice presidency can have on a single year term is much more than the academic vice president, which is why I chose to run,” Baird said. “The current SVP has done a lot to increase funding towards ULPD and so on sight at all affiliated properties now there will be a ULPD presence 24/7, which I think is super awesome and is something that I would continue to support,” he said. “I am advocating for changes in the rave guardian system just because it is kind of difficult to get a full picture of all the crime that happens because rave guardian alerts are simply for active crime.” He suggested an app with a map of where crimes have taken place within the last 24 hours.

Lydia Burns is a junior Math and Political science major.

“So we have a really great relationship between ULPD and UMPD, the campus has started to do some projects where those organizations are partnering up together which I think is really exciting and should continue to happen to increase the amount of police that are on campus especially during the night time. I think we need to do a better job at lighting areas near residence halls, such as Brandeis Avenue to Fourth Street where community parks are because that’s where a lot of the robberies are happening.” She said expanding the lighting along the L-trail will create a safer environment for students. 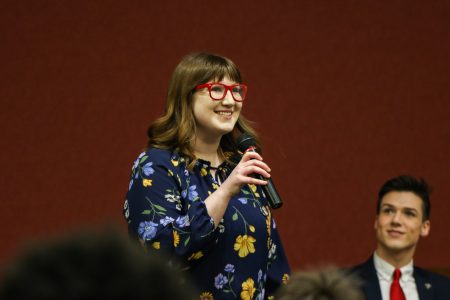 Matthew Woodward is a sophomore Education major
“I want to take all aspects of the student body services and set tangible goals that we can see, I want to make it something more specific that I am able to work with the administration on,” he said. “Being an education major, my focus is on learning. As students, how can we focus in the classroom when the services around us are not functioning properly? What I want to do with my experience so far is to is increase the transparency, efficiency, and advocacy in SGA and focus on those main aspects of what services is all about.”

Photos by David Mucker and Gabriel Wiest / The Louisville Cardinal