As students return to campus, dust and noise will still be in the air at Ekstrom Library, which is currently undergoing first floor renovations.

The renovations, which are the first changes to the first floor since 1981, have caused the East entrance to the library to be closed since the beginning of May. Construction was supposed to be completed by August 15, but as it currently stands, it will not be completely done until Sept. 21, as a few main components remain uncompleted.

“Our goal is, as of Monday, Aug. 24, to reopen the doors to the East side, so that all the new and returning students are going to have access to the main floor of Ekstrom,” said Associate Dean of Libraries Bruce Keisling.

Students will have access to the primary services of the first floor, including computers, printing, REACH, the Digital Media Suite, pathways to the rest of the library and the new Ekstrom service desk. 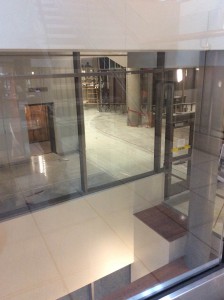 However, much of renovation will be incomplete when students arrive for classes.

“What won’t be finished as of Monday are the new study spaces,” said Keisling.

The new furniture for the individual and group study spaces are set to be delivered on Sept. 8, he said.

The completion of the new Writing Center and research offices will also be delayed through September.

According to Keisling, the reason for the delays are the normal issues that arise during construction projects.

“It has been an engaging summer everywhere on campus with construction, but it’s mostly just normal stuff,” he said. “There have been some delays in getting particular light fixtures. You order it, but you’re at the mercy of a supplier to get it here.”

Despite the delays, Keisling is confident that students will benefit from the finished product.

“We know you’re going to love the outcome. Worth the wait,” he said. “It will be visually impressive, but I think it’s just going to be easier to use.”