If you have walked around campus, you have probably noticed the slim poles with the big, bold blue lights on top of them. As those who remember the ‘Blue Light Special’ during welcome week may remember, these guiding lights are your emergency hotline in case the worst should happen, providing a phone line to ULPD and an emergency alert.

In light of increased safety concern after recent crimes, the university has begun a review session concerned with overall campus safety. Ideas like the ‘L-Trail’, a path along a high-traffic route through campus that will be more brightly lit, as well as other initiatives, are being put on the table for discussion. What’s potentially on the chopping block, however, is the use of the telephone services contained the blue light safety system. 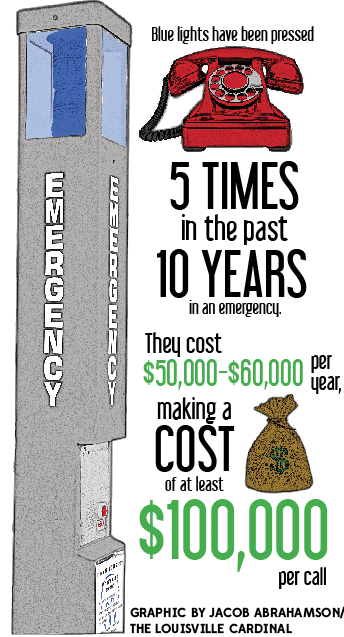 Vice President for SGA, detailed in an earlier article that, despite the continual upkeep of these systems, their actual usage has been scarce.

“In the past ten years, they have been used a total of five times,” she said.

“Though it is a safety infrastructure,” Cooksey said, “they are not utilized by students as they should. Expenses are not equivalent to the amount of safety.”

The current proposal under review would remove the telephone systems out of the blue lights, but keep the emergency alarm system and blue light intact.

This would allow not only for income to be added to the safety budget, but also maintain the precaution of the blue light to aid in warding off any potential criminal intent.

The added income would go towards putting more security officials on campus, alongside the four new officers already added this semester. These officers would patrol areas around the proposed L-Trail, but also areas nearby campus that are heavily trafficked by students, such as Lee Street and the outskirts of the university near The Grove.

Cooksey also discussed the implementation of research post officers, who would be specifically in charge of interacting with the student and faculty community. These officers would engage with the community, but could not answer calls outside this jurisdiction.

Kenny Brown, assistant chief of police and commander of administration and investigations, stated that several reviews of the blue light systems have occurred in the past ten years, only to result in the establishment of continued maintenance and upgrades for the systems.

“The blue lights give people a sense of comfort,” he said. “Though infrequently used, they give a direct line to our (communications) center.”

Brown went on to state he believes the reason behind the disuse of the system is due to the rise of cell services and smartphone applications.

Such applications are another alternative under discussion by the review panel. Cooksey said that, while they are looking at whether it would be a good thing to partner with exclusive applications to promote campus safety, the school already provides some method of the service.

“The U of L mobile app provides a dialer link to three different services. A student can use it to get in contact with U of L police, 911 services, or call an escort.”

She also implored students to apply for the Rave Alert service, which provides texts and emails about current crime situations in and around campus.

While Cooksey could not give a definitive date on the end of the review session, she hoped that the installation of these features could begin within the new school year.

“Even if the blue lights were entirely phased out,” she said, “alternatives would be found to promote campus and student safety.”

Tool that tests for E. Coli in water developed by U of L students