A U of L student was taken into police custody this morning after a shooting threat was posted on the social media website 4chan early this morning.

The threat, which was allegedly made by freshman Charles Robb, said “I’m going to shoot up University of Louisville’s Miller hall tomorrow at 10AM. I’m tired of the staffs disrespect and their abuse.”

ULPD, Dean of Students, IT, LMPD and the FBI investigated the threat after ULPD received a tip, and quickly identified the source.

Provost Shirley Willihnganz sent an email to the U of L community detailing the response to the threat.

“This was a significant disruption for U of L and a reminder to all of us that words and postings do have consequences.”

Freshman, and current Miller Hall resident Clay Elliot said, “It was very scary even having the thought that we were in danger. It honestly made me question if I should still be living in a community style dorm. We never hear about this stuff happening in CP (Community Park) or BJ (Bettie Johnson).” 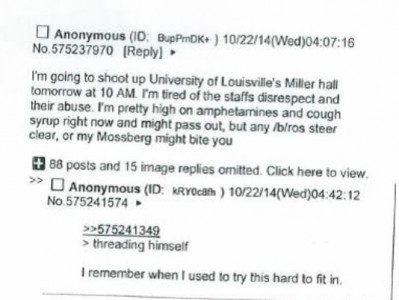