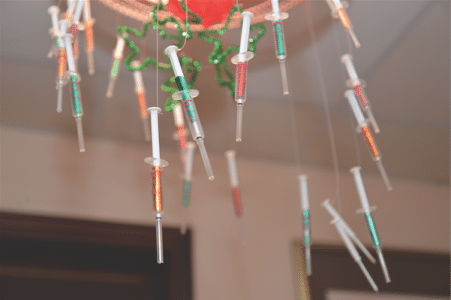 It turns out this tragic death was not unusual.

In the last decade there has been a 55 percent increase in heroin overdose fatalities across the nation according to the U.S. Centers for Disease Control.  Since it is more difficult to “drug shop” with physicians to get prescriptions for pain medications, heroin has become the leading alternative for opiate usage among addicts.

Here in Louisville, the police department reports that 120 heroin-related arrests were made in 2010, 190 in 2011 and a staggering increase of nearly 780 in 2012.  The numbers since have only risen.

Not only is heroin a cheaper alternative compared to pain meds, it’s easier to find.  These rising numbers and cases make a statement like the one President Ramsey made this past week in relation with the university’s safety issue, eerily more relevant.

When speaking to LMPD’s official Police Surgeon Dr. Bill Smock, who was formerly the leading professor of emergency medicine at University Hospital, he made clear that “ever since the state legislation has cracked down on doctors by forcing them to practice deeper KASPER background checks on patients, heroin has become an issue of concern for those seeking to abuse opiate usage.”

With the leading misconception that hero in usage predominantly resides within West Louisville, Smock puts this theory to rest when he concludes that heroin usage has no profile user and it’s commonality “stretches across the board.”

For the user, heroin not only enters their lives by its own accord, but also makes it increasingly difficult for any of these users to abandon their addiction once it becomes a part of their body.  With withdrawal symptoms that range from vomiting to muscle pains and diarrhea, heroin takes a serious toll on the user.  Either they can successfully get through these agonizing symptoms or subside to their temptations and use once more.

A psychiatrist who’s familiar with these temptations is Dr. Lori Nation of Pikeville, Ky.  Nation understands these symptoms of withdrawal because she sees them everyday specializing in heroin addiction and recovery.  Noting that withdrawals aren’t the only issue of concern for the average heroin user, Nation explains “Many heroin addicts lose sight of their overall health and well-being, therefore many fall victim to hepatitis simply by using unclean needles for their injections.”

Nation also stressed, “Many people are fooled that it’s the quantity of these drugs that lead to an overdose, when most of time it’s merely the mixture.”

Whether it’s marijuana, prescription pain meds, psychedelics, or maybe even the occasional “Molly” famous rappers such as Wiz Khalifa and Trinidad James so proudly sculpt their careers around, it becomes pretty simple to stumble upon one of these highs at a party or any generic social outing here in 2014.  With social media continuously fueling our knowledge of these street pharmaceuticals, there is no doubt that our generation is more plugged in to the world of drugs than any before our time.

Nowadays even though our generation may be known for our intuitiveness when it comes to the ever-expanding realm of technology and connectivity, our general perception of the world of drugs around us is severely flawed.

The majority of us believe that the marijuana and prescription pill usage we notice throughout the crowds of our peers is where the limit is drawn.  We believe that anyone who indulges in the usage of any other drug beyond marijuana and prescription pain pills are the abnormal and minority among drug addicts.  Our perception is skewed.  Heroin has made it’s quiet but volatile return into our campus and community.

Donate blood, the world depends on it

Leave the mantras behind: It’s a new year, not a new you

Happy holidays to all, and to all a good night