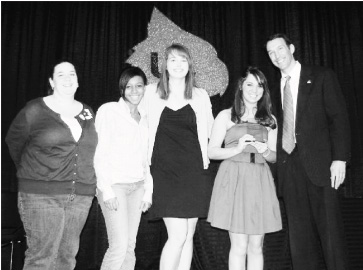 Women 4 Women, a nonprofit organization in Louisville, follows the belief that a core strength of the community lies in the contributions of women.

With women at the helm, the mission of Women 4 Women is to make Louisville a community that will be one of the best places for girls and women to live and work. In support of that goal is the Women 4 Women Student Chapter, a campus-centered offshoot of the larger nonprofit organization.

“I read about the group on an e-mail that listed SGA events and saw that they were having a meeting,” said Gabrielle Maxedon, a senior justice administration major and the current president of the Women 4 Women Student Chapter. “I really had no idea what to expect. But I started going to the meetings and I’ve been involved ever since.”

According to Maxedon, Shirley Willihnganz, provost at the University of Louisville and executive vice president of Women 4 Women, wanted to establish a satellite group on campus. After generating enough interest among faculty and students, the Women 4 Women Student Chapter was born.

“When I first joined, only about five people attended meetings,” said Maxedon. “But the level of involvement has grown, through advertisements and events. A big part of pushing the group forward is finding those few dedicated members.”

Ashley Wimsett, a junior marketing major and the program coordinator for Women 4 Women Student Chapter, said that she stays closely connected with other groups on campus that work to confront issues such as violence against women, human trafficking, discrimination and harassment.

“I hope that my efforts through Women 4 Women Student Chapter will leave a positive impact on campus long after I’ve left college,” said Wimsett, who is expected to graduate in the spring of 2012.

Wimsett said she plans to stay with the RSO to help coordinate a statewide leadership conference for women.

“It’ll be a challenge,” said Wimsett, regarding the upcoming leadership conference, which is anticipated to take place in Louisville. “But I’m definitely ready for a good challenge.”

However, Women 4 Women Student Chapter is much more than just community outreach. The RSO also helps to create networking relationships for students who want to learn more about their prospective careers and gain a few professional contacts along the way.

“Members are assigned a professional mentor to help them gain hands-on experience in their major,” said Maxedon. “For example, a justice administration student would most likely be assigned to a lawyer or something. Having that experience would help the student learn more about the profession before graduating.”

In this sense, the students involved in Women 4 Women Student Chapter not only give of themselves, but they also receive something in return. The professional mentoring program is one of the many ways the RSO seeks to empower women to become leaders, in the workplace as well as the community.

Despite its name, the focus of Women 4 Women is not only on female empowerment, but also on male involvement. By staying inclusive to both women and men, Women 4 Women Student Chapter hopes to create a positive difference on campus and in the community.

“It’s important to get males involved when we address issues surrounding women,” said Blair Bowman, a senior psychology major and the vice president of the Women 4 Women Student Chapter. “Although the RSO is led by females, it is still essential that men stand up and show that they are committed to supporting women in the community.”

Bowman, who recently became involved with Women 4 Women in 2009, said that the RSO has overcome a lot of challenges in the recent past, but is well prepared for the future.

“I noticed that we’ve really grown out of just talking about doing things,” said Bowman. “Now we’re putting our thoughts into action.”