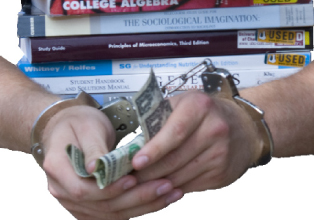 With two semesters left until graduation, Maja Salipur was confident that her last year at the University of Louisville wouldn’t throw her any surprises.?

That was until she entered Prof. Allen Share’s Masterpieces of the 19th and 20th Centuries class.?

Although the course load seemed normal and the class was similar to others the fine art major had taken at U of L, one thing about the class stood out to her: 19 books.?

“I honestly thought I would drop the class,” said Salipur. “I thought at first that I read the syllabus wrong because the list just went on and on and on.”

Salipur’s book total for her six classes came to 34, which she said would have cost her nearly $500, due to several of the books being in coursepacks and paperback.

Although Salipur’s experience is rare, she isn’t alone when it comes to students facing the burden of purchasing textbooks.

According to the U.S. Government Accountability Office, the average amount spent by a student on textbooks each year is $898, which is about an eighth the cost of tuition at U of L. They also found that college textbook prices have risen at twice the rate of annual inflation over the last two decades and that textbook prices have tripled since 1986, with a rate of increase of 186 percent. A 2004 study by CALPIRG, a group that advocates for public interest, found that the average textbook cost for a student is $102.44. ?

U of L’s Vice Provost Dale Billingsley said that although the university is trying to help students, there’s little they can do.?

“We don’t do too much,” said Billingsley, who also teaches English classes at U of L. “It’s not that the university is uninterested in the problem or wants to boost the profits of booksellers or something, but the problem is so atomized that it’s hard to pinpoint a certain problem.” ?

Although some blame the bookstores and publishing companies for high textbook costs, others believe the university and individual professors need to ensure lower costs.

?”We only do what the professors tell us,” said Schuknecht, who added that even though professors have been late in the past, this year has been better. “We e-mail and call to the point where some professors push back and tell us to stop calling them.”

Schuknecht also said that students should ask their professors if they turned in their book order.

“The earlier the better,” said Schuknecht of book requests sent in by professors. “The professor really needs to understand that it’s not just one student they’re affecting, it’s multiple.”

Michael Anthony and Pamela Curtis, who are co-instructors of a leadership course at U of L, said that students must also try to come up with different options for buying books. ?

“If the students keep buying the books and not complaining then there’s not a problem,” said Curtis, who works with student affairs.

Salipur, however, decided not to drop Share’s class, because she needed the course in order to graduate.?

According to Share, however, the 19 books are necessary in order for him to effectively teach his class and he was willing to inform the students of where and how to find the cheapest books.?

“One of my students told me last year that she had purchased one of the required texts for my course on Amazon.com for 17 cents,” said Share in an e-mail statement, who added that several of the books were also placed in a coursepack and that many were short, readily available paperbacks. “I told the students to search the online discount booksellers for super bargains like this.”

The GAO report concluded that much of the increase in textbook costs could be attributed to the growing demand for other course material features that may include DVD’s or other Web related material.?

According to Schuknecht, many students are being forced to shoulder heavier book costs because their professors request new editions of books for their class.

Professors such as Anthony and Curtis are trying to help students out on a smaller scale by reusing books for particular classes. The course they teach has two books, with one supplied yearly by them and the other available online for free or at a bookstore.?

Anthony added that the university often ignores how cost effective the web can be for students buying books.

“We ignore technology in a lot of this,” said Anthony, who added that the use of audiobooks and iPods would help lower costs. “We can do almost anything we want with technology, but we buy 19 books? We can do better than that.”

Student Government Association President Rudy Spencer?said that he has often resorted to purchasing textbooks online due to the convenience and less expensive materials. Spencer said that in his communication course this semester, a professor informed students of a $100 bookstore textbook that was available on Amazon.com for 80 cents.?

According to a recent report by Student Watch, nearly 24-percent of college students purchase their course materials online.?

“I did [buy books online] quite a bit my freshman and sophomore year,” said Spencer, who added that he changed after he learned how much the university bookstore gives back to student services and campus events. “But I am going to buy that [communication book] on Amazon.”

Spencer added that SGA is looking into more online venues that would help students, including allotting $1,000 to Bookexchange.com, in order to allow students to freely participate in exchanging textbooks at U of L.?

Other web-based companies, such as Uloop.com, have also become involved in the highly competitive textbook industry, which often contributes to lower textbook costs based on that competition.?

“Students have the freedom to choose where they buy and sell their textbooks, and the good news is that students have options to combat the rising textbook prices,” said Corey Cleek, a representative of Uloop.com, which was recently initiated at U of L and has saved students more than $3.6 million in textbook costs since being launched in 2004. “This saves students lots of money, and it’s easy to meet another student on campus for the exchange.”

Billingsley said that with all the new options and students wanting to spend less on books and earn more on the reselling of books, they often simply don’t use the material.?

“Because they have no intention of keeping them, they don’t use it because they’ll get better money on resale, but then why buy it in the first place?,” he said. “Just hauling the thing around isn’t going to help you and what I see is that students view the books more as cult objects rather than tools. Students are being ripped off and then they’re ripping themselves off because they don’t use [the material].”