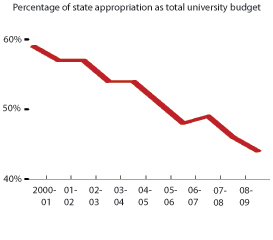 For Rachel Noble, budget cuts at the University of Louisville represent more than just dollars in the minus column. They represent a new burden for the next generation of U of L students to shoulder.
“Incoming students are very concerned about the budget situation,” said Noble, a junior communication major, who added that her experience with the student orientation staff at this year’s freshman orientation allowed her to better understand the needs of the incoming students. “At this point, they are going to be at the university the longest and they are already concerned with things like ‘how am I going to work and go to school and get things paid for?'”
Concern for U of L’s financial future isn’t limited to students like Noble. As cuts from Frankfort have forced the elimination of U of L staff positions, cut back department budgets and limited new hiring across the university, administrators also have been forced to face another issue: tuition.
For Vice President of Finance Michael Curtin, the challenge is to keep the university moving forward without pricing its students out of an education with massive tuition hikes.
“We aren’t looking at the type of large increase that we have in the past,” Curtin said. “The assumption is that our students couldn’t withstand a double digit percent increase. It wouldn’t be fair to put that on the students.”
Even though some students feel a tuition increase may be inevitable, they also fear that it will make college unaffordable for others.
“Undergraduate tuition is really high right now and graduate tuition is even higher,” P.h.D. biology student Amber Carrier said. “If you look at what students pay in the medical school and dental school, it is astronomical. Another tuition increase is a really scary thought.”
“I feel like these cuts could definitely slow the progress of the university and of the state,” junior finance major Anna Ramsey said. “The state wants us to be this big research university and we can’t do that unless they fund us.”
Curtin said, in light of these budget cuts, the university has begun re-planning its financial future. He said the university’s 2020 business plan, which charts U of L’s financial progress for the next 12 years, is now being redone to reflect current state funding and the funding expected in the coming years. Provost Shirley Willihnganz said the university’s new 2020 Strategic Plan will be phased in more slowly because of the cuts.
“There weren’t any areas of the plan that we weren’t able to put forward,” Willihnganz stated, “but there were certain initiatives that we realize maybe aren’t going to move as fast as might have hoped.”
According to Curtin, the university intends to rely more heavily on its own revenue sources in the future and less on state funds. He cited the Haymarket research park development on the Health Sciences Campus as one source they hope to use heavily in the future.
There are also hopes to utilize the bio-safety research lab on Shelby Campus as more of a revenue source.
“That money would come back into the university to be used by the academic units,” Curtin said. “We are really looking at our balance sheet to see what assets we have which are under performing. There is a lot of potential there.”
In considering future state appropriation though, Curtin said he is not optimistic, citing the downward trend that funding has been on over the past 10 years.
For Student Government Association President Rudy Spencer though, the fight for state funding shouldn’t only be for university administrators. Spencer feels students should work harder in making higher education a top priority in Frankfort.
“There has to be some blame on students,” Spencer said. “There are some of the smartest people in Kentucky who don’t understand the importance of protecting the foundation of their education.”
Spencer also said making students more aware of these issues is a big focus of his administration.
One initiative he mentioned is “Rate My Legislator,” where SGA will disseminate information to students about the voting records of legislators toward higher education. Spencer hopes this will help students make a more informed decision at the polls in November.
“If I don’t think a student understands how these cuts hurt them, we aren’t doing our job,” Spencer said. “If legislators see that students are going to be involved in this voting process, then they might say ‘I need to find an issue that supports them.'”
Regardless of budget cuts and possible tuition increases, Noble said she is optimistic the university will find a way to keep higher education affordable for all students.
“I would hope that [tuition increases] won’t stop people from coming here,” Noble said. “I would hope they would be able to find aid. There are plenty of options open to them and hopefully more will become available as tuition continues to go up.”