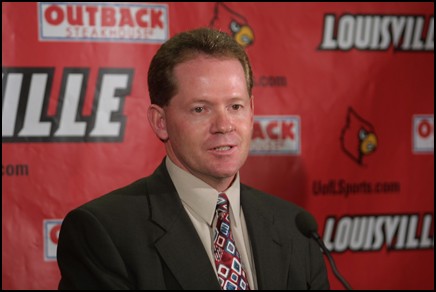 On Monday afternoon, Bobby Petrino became the 19th head football coach at the University of Louisville. Petrino takes over for John L. Smith who left last week to take the head-coaching job at Michigan State.

Smith believes that Petrino will do a tremendous job here with the Cardinals. “He’s awesome,” Smith says about Petrino. “He’s a very brilliant, young, and energetic person who’s the right person to take the program to the next level. I am so pleased, excited and comfortable knowing that he will be the coach at Louisville. I love him. He’s been part of our family and a part of the Louisville family. I know he’ll do a terrific job.”

Petrino’s father is a legendary coach in the state of Montana. Bob Petrino coached at Carroll College in Helena Montana and was inducted into the hall of fame there.

From ’87 to ’88 he was the receivers and tight ends coach at Weber State. In ’89 he was quarterback coach at Idaho, and from ’90 to ’91 he was offensive coordinator and quarterbacks coach.

From ’92 to ’93 he was quarterback coach at Arizona State. In ’94 he was offensive coordinator at Nevada.

From ’95-97 he was offensive coordinator quarterbacks coach at Utah State.

In ’98 he was the offensive coordinator and quarterback coach at U of L.

From ’99 to 2001 he was quarterbacks coach for the Jacksonville Jaguars, and in 2001 he was offensive coordinator for the Jaguars.

This year he became the offensive coordinator quarterbacks coach at Auburn.

Petrino will stay on at Auburn as offensive coordinator through the Tiger’s bowl game January 1st against Penn State in the Capital One bowl.

The job at U of L will be his first as a head coach at any level.

While here at Louisville as offensive coordinator, Petrino’s offense was ranked number one in the nation. The quarterback on that year’s team, Chris Redman, now with the Baltimore Ravens, believes much of his success comes from playing under Petrino. “I would not be where I am today without coach Petrino,” said Redman. “He has had a huge impact on my career and is a major reason why I am playing at the next level. He is one of the best coaching minds I have worked with and I know he’s going to do a great job in taking the University of Louisville to the next level.”

Petrino wants to bring another former U of L quarterback onto his coaching staff in Jeff Brohm. “I’ve talked to Jeff a couple of times,” says Petrino. “And I’m looking forward to having him come aboard.”

As of right now the only coach Smith had on his staff this year that will be returning to Louisville is tight ends coach Greg Nord. “I’ve worked real hard to keep coach Nord here,” said Petrino. “I’m excited to the fact that we will be able to keep Greg here. I know he’s done a great job in recruiting and he’s been a big part of the success here for the last five years.”

One of the things Petrino likes about college coaching is the more family atmosphere. “It’s a family affair,” he said. “I missed that for three years when I was in the NFL. Your family they kind of kept away from it. I grew up being locked in the lockers, being in the locker room, being on the sidelines. I know when we were here, Nick used to be down on the sidelines with me and I know Bobby will be. Its something we’ve missed for three years.”

Petrino’s first game as U of L head coach will be against arch-rival Kentucky down in Lexington, against U of K’s new football coach, who has yet to be chosen.