Local Louisville icon Darnell Ferguson, aka SuperChef, has opened “SuperChef’s Express” as a cornerstone of the SAC Marketplace.

Ferguson attended culinary school in Louisville.  He traveled to Beijing as one of only 22 young chefs to cook in the 2008 Olympics. 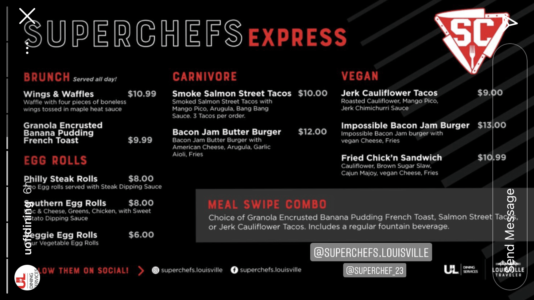 He has also opened nearly a dozen restaurants. Two are right here in Louisville, SuperChefs and his newest Tha Drippin’ Crab in the West End.

The Philly Steak egg rolls are an interesting twist on the classic sandwich, housing the steak/onion/pepper pairing in a deliciously crispy egg roll filled with a gooey cheese sauce. Be warned, it’s messy but in a good way!

SuperChef’s Express is located in the SAC Marketplace at the Louisville Traveler station.

Tate Luckey has been a member of the Louisville Cardinal since 2020. When not writing or scrambling to complete assignments, he enjoys baking, playing guitar, and jamming to funk music.