“Any time I say he has the character of Peyton Siva, you know obviously what I think. That’s about as high a grade as I can give anyone’s character,” Pitino said after Mitchell signed with U of L.

On the court, Pitino was enthralled with the freshman’s athleticism and said Mitchell was a “6-foot-2 Terrence Williams,” a former All-American who played from 2005-09. Pitino also added Mitchell’s name to a list of recent players including Terry Rozier who “want the University of Louisville” and “want basketball.”

As a freshman, Mitchell played primarily as a reserve in the back-court with Quentin Snider and Trey Lewis starting and playing more minutes. Similar to Mitchell, both Siva and Rozier came off the bench for a majority of their first year.

Since Pitino made the comparison of the now rising sophomore to his three former players, glancing over their four respective freshmen years is interesting, considering Siva and Williams became All-Americans as seniors and Rozier was selected in the first round of the NBA Draft after his sophomore year.

Some of the statistical comparisons are skewed because of playing time, so the most telling numbers are the per-40 minutes. In the three per-40 categories, Mitchell ranked first in scoring, second in rebounding and third in assists.

The three former Cardinals took big steps in their sophomore years and had more of an impact with increased playing time. Mitchell’s intangibles and statistical output mirrors the comparisons Pitino made earlier this year. 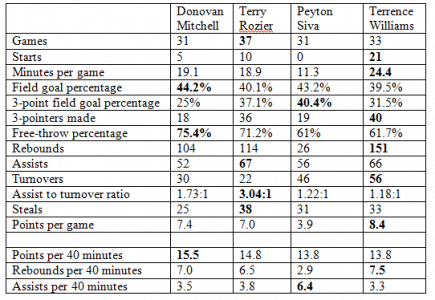