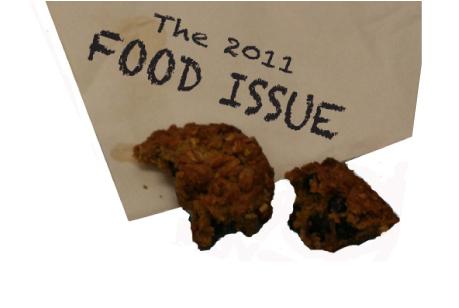 The college diet is prebaked, dehydrated, boxed, bagged, preservative-laden, and more than likely marketed by a cartoon clown. It is pizza, chips, beer, Easy Mac, and any other cheap, easily prepared foodstuff with a relatively long shelf life.

“For the first 20 years of my life, I thought food came from a box or from a restaurant,” said Amy Talbott, a recent graduate of the University of Louisville.

Talbott’s views have since changed.

“I got into cooking about five years ago,” said Talbott in an e-mail communication with The Louisville Cardinal. “I began to research different ingredients and cooking techniques and fell in love.”

Talbott’s newfound interest in food has recently found a home in the blogosphere. Her blog, “Sugar Over Louisville,” documents her own cooking exploits and examines several restaurants in the Louisville area. It seems to have found an audience in a culture where food and cooking are increasingly important.

“When I tell people about my love of cooking and baking, they’re generally interested,” said Talbott. “I think what’s changed is that people know a lot more about cooking these days, due to food shows, magazines and books.”

Scroll through the App Store on any iPhone and the list is sure to be filled with food-friendly applications like Epicurious Recipes & Shopping List, AllRecipes and Urbanspoon. Television channels such as the Food Network and the Cooking Channel run 24-hour food-related programming. Estimates for yearly United States cookbook sales range from $60 million to $530 million. Caught in the mainstream food explosion, many have decided to don the chef’s hat and give cooking a try.

“I started [home-brewing] after I discovered craft beer,” said Josh Bailey, a graduate student in chemical engineering who brews his own beer in his free time. “When I learned that people made beer at home, I thought, ‘I have to try this.'”

Bailey is not alone.

“Since I’ve started this, I’ve noticed that there are a lot of people interested in home-brewing,” said Bailey. “It’s not even just beer and wine, but food too.”

According to Karen Newton, director of health promotion and education for U of L Campus Health Services, there are several benefits to at-home cooking.

“If [students] cook even one meal a week, it’ll be less expensive than eating out,” said Newton. “If they use the right ingredients, it’ll help them improve their nutrition, too.”

Nutrition is an area in which U of L students – like many college students across the country – tend to fall flat. According to the 2010 National Health Assessment Survey for U of L, only 3.7 percent of U of L students reported getting the recommended five servings of fruits and vegetables per day.

Even with the prevalence of food and cooking in today’s culture, its impact on the eating habits of college students is only now beginning to take effect.

“A television show on nutrition and cooking may be influential in changing students’ knowledge, but it seems to have little impact on dietary behaviors,” reads a 2009 article in the Journal of Nutrition Education and Behavior.

For students who are considering choosing healthier options, Newton advised that nutrition can be directly related to academic performance and overall health.

Nutrition is a major factor in the Basic Pantry program created by Campus Health Services.

“The food you have on hand largely determines how healthfully you will eat,” reads the 2010 abstract for the program. “So wisely stocking your pantry is a step toward your good health.”

Basic Pantry is a collaborative effort between Sodexo and Campus Health Services. It seeks to ensure that students on campus have access to healthy foods and ingredients. Many of the recommended items are available in The Nest grocery store.

“We want students to know how to stock a basic pantry and how to use those ingredients to prepare a meal,” said Newton.

To reach this goal, Campus Health Services also offers cooking classes to students. Each class is led by a professional chef and demonstrates a simple recipe for students to replicate. According to Newton, each class can accommodate 12 students.

Additionally, Campus Health Services will be providing cooking kits to three campus residence halls. Threlkeld Hall, Unitas Tower and the Complex will each receive a kit stocked with pots, pans and other cooking utensils for residents to reserve and use in their building’s kitchens.

However, many students who have tried their hands at cooking have noted that they have some difficulty working it into their schedules.

“I really have to schedule ahead,” said Bailey. “The whole process can take several hours.”

If students are unable to fit kitchen time into their schedules, they still have the option of eating eclectic foods in restaurants. While this is often more expensive than cooking at home, some options may fit into students’ university meal plans.

According to a recent survey conducted by the National Association of College and University Food Services, an average total of 46.5 percent of students rated having a wide variety of foods in their school’s dining services to be either important or extremely important. In the wake of the increased significance of healthy food options, universities nationwide have moved to increase on-campus dining options.

“Nobody can deny that college foodservice has changed,” said Talbott. “I wasn’t in college 10 years ago, but I seriously doubt that things like sushi, paninis and lattes were as commonly available on college campuses then. When people know more about food and more about what kinds of foods are out there, they demand more of a variety.”

While campus dining services across the nation move to meet the needs of the changing student palate, many students are just enjoying the ride. According to many college foodies, the key is not to take it too seriously.

“I admit that I don’t cook meals on a daily basis,” said Talbott. “I cook eggs and toast for breakfast, but that’s about it. Cooking is more of a weekend leisure thing for me.”