By Joe Wilson and Tate Luckey — 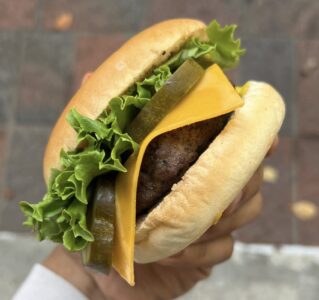 Burgers from the ULPD cookout on October 12th.

On Oct. 12, the University of Louisville Police Department (ULPD) partnered with the Student Government Association (SGA) to host a cookout outside the Bingham Humanities Building to promote campus safety.

“With campus safety being a big focus of our administration this year, and with it being a big priority on students’ lists overall, we thought an event like this to give students a chance to really meet ULPD officers, get to know them on a personal level—make it so they’re not just the figment behind the blue and red lights, make to where they’re actual people on campus that care about our students,” Academic Vice President Bryson Sebastian said.

With an array of hot dogs, hamburgers, snacks, and desserts, ULPD officers greeted students, staff, and faculty. Fliers containing information such as the latest crime reports and campus safety resources were handed out to educate the community.

During the cookout, Chief of Police Steven Green sat down with The Louisville Cardinal to talk about ULPD’s partnership with SGA and the most pressing security concerns on campus.

Students and staff wait to receive food during the ULPD cookout.

The biggest emphasis was the importance of ULPD’s partnership with SGA. “We’re here for the safety of the students, faculty, and staff, and reaching out to them [SGA], they’re just a conduit for our message and putting that message out. It’s just been a great relationship so far,” he said. Green noted the collaboration between ULPD and SGA is the closest he has seen in the 11 years he has worked for ULPD.

When asked about his concerns in terms of campus safety, Green said: “Theft is always a problem here, bicycle theft, and things like that.” Green, however, also expressed optimism about the direction of campus safety. “I’m pretty happy with where we’re at, to be honest with you. I think we’re in a very safe community right now compared to what’s going on around us.”

About the Author: Joe Wilson