KIRBY talks Forecastle 2022, Sis, He Wasn’t The One, and Stax Records 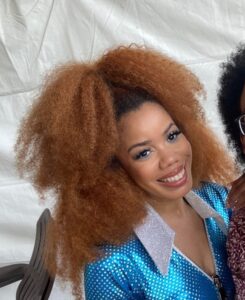 Mississippi native KIRBY opened with an empowering performance during Day 3 of Forecastle Festival, showcasing her groovy R&B sound from 2018’s Sis and 2021’s Sis, He Wasnt The One. After her show, The Louisville Cardinal sat down with KIRBY.

How is it being here for Forecastle?

“I had some good vegan food. Any city that has a southern vegan place, I’m already thinking ‘Alright well I feel welcome,’ but the crowd was so nice! Even being earlier in the day, they were just in it ready to eat it up. I know [Louisville] is technically not the south, but to me, it felt like the south.”

Yeah, it’s a pretty big topic of debate, especially with Louisville being so close to Indiana. The rest of the state has more of a southern identity.

“Yeah, and Indiana is literally across the river, that’s the wild!”

What did think of your show specifically? Were you kind of nervous to go out?

“This is my first time with musicians, but they killed it. We did a tour with John Legend last year, and Pink Sweats, and so I normally use both of their dancers. ”

I would agree you did great! In doing a bit of research about you, I was surprised to learn you helped co-write 2015’s FourFiveSeconds with Ye, Rihanna and Paul McCartney. Can you talk about what it was like to share the songwriting process with them?

“Sure, it was really a lot of one on one experience. The song wasn’t too good for Ye, but it was good for Ri Ri. I didn’t even know that was going to be the end result, but she killed it. As a songwriter, you kinda dream of moments like that. Kanye was part of the reason why I’m doing what I do now, and so to give back to someone who gave so much to you, and for Rhianna to put out a guitar-driven song, it was dope to be a part of. I’ve never done a live cover of it, and everyone was singing their asses off! The whole crowd! I remember thinking ‘This is what it must feel like’. I was ready for them to sing just the hook, but they started off at the first verse.”

The aesthetic of your show; it gave off very heavy Soul Train vibes. Can you talk a bit about translating the sound of your records to the stage?

“Choosing the little things, that’s the most fun part, especially like the choices of what to play in the back. You don’t want to exactly make it a copy [of soul], but I find you need artists to, in a way, pay tribute to a dying art. You need to in some ways make it seem fresh.”

Definitely. I found it very empowering for anyone listening.

“I always want [my live shows] to come off as people empowerment. I want people to leave feeling like ‘I’m bad as shit.’ Sis, He Wasn’t The One was me detailing the whole truth. I felt like for me not to tell that part was me not telling the whole story. It’s a bit of a transitional record. I really really feel my best on stage. If you don’t leave and feel like you’re the baddest or feeling the best version of yourself, or seen; I want to give people that.”

“We’re still working on a project, and I’m excited to make a bigger sound. I feel like I still don’t have a record where people are like “Ugh, it made me cry;’ I’m ready to lean more into emotionality.”“We also have a tour with Leon Bridges coming up, in Europe. I know that’ll change me as an artist, performing those songs in front of those kinds of crowds.”

Kirby by Roger Ho for Forecastle

“I put myself out there when it seems like no one’s clapping. I feel like in some ways younger people these days feel kind of suffocated by social media. ‘If my video doesn’t get a million views, why even post it,’ right? Being naturally awesome is just being persistent in whatever your truth is and not wavering because people aren’t responding. It sounds cliche, but there is not another you! I can interview with 10 other people, and the interview won’t be the same. You’ve gotta know that that has value.”

‘I met a dude from Tame Impala, I couldn’t quite identify if it was Kevin [Parker], but he asked me what time I performed. I said I opened today at 2:30, and he told me he headlined last night! Regardless, we both shared the same elevator.”

That’s a really good perspective to have, especially right now.

I do want to ask- you also aren’t currently signed to a label, right? Are there any struggles with being a more independent artist?

“The biggest thing about having a label is having the money, period. The money and the marketing. Nowadays marketing is all TikTok, but it’s mainly just about the bank. Like saying “I want a sound guy or pay my dancers the top rate.” it’s less about me. My whole team is black and I want to pay them the top tier. When you’re independent it’s hard. Sometimes you can’t give them what a label artist can give, and that’s why it’s important to support your independent artists. They want to get the best and also pay them the best.”

Can you elaborate a bit more, as to how your team was assembled? Was it kind of through people you knew, or?

“No no no. I found my manager before Pink Sweats really blew up- I was trying to get on the Spotify playlists, and I saw Pink was on the cover of the R&B playlist, and at the time he had maybe 9000 listeners. This is back when Honesty has just come out. I said to myself “This guy- he’s a black guy, only 9000 followers and is on the cover– he has to have a team.“ I found his manager through some research and DM’d him, sent him my discography, basically asked if he would be willing to have a meeting with me. I’m not ashamed. Even on my tour with John Legend I had just tweeted asking “Somone tell him to let me open for him!” A lot of being independent has been the hustle of just asking for help.”

Well, if you have an opening on your press team…

Right. Well, let’s pivot back to your music. It has an incredible energy and groove; how did you go about capturing that?

“I grew up in Mississippi, but similar to Indiana’s proximity [to Kentucky], I just would drive to Memphis, near Stax.”

“Yeah! So when you think of my costumes and hair, that’s all from [artists like] Isaac Hayes, Carla Thomas. They would come out in bright colors, sharp. It’s this Black afro-futurism. I don’t know if you’ve ever seen the documentary for WattsStax, but I’m heavily influenced by Black artists from that period. I feel like just being a kid growing up in that area, too, it’s kind of in my blood.”

I get that. Moving to the present, what artists have you been listening to currently?

“Man, my brain is completely engulfed in Kendrick Lamar right now. Still trying to process that album. Sam Dew is one of my favorite artists. I gotta get into IDK; I just saw his Tiny Desk. There’s this girl called Layah. Fire. She does all her videos and designs. Fire.”

Being more noteworthy on sites now like Tiktok, and starting from your A Song a Day’s you used to post on YouTube, does it feel weird to be that close to interacting with your audience?

“I think I need to be more live. I can’t just hang out and talk, like on Instagram Live, you know? I’m very 1 on 1 and try to be engaging. I’m the friend in my friend circle who people call to tell about their problems.”

“Yeah, I’m the listener, I soak it all up. I think it’s a lot of pressure to make something like a Tiktok Dance, and it’s a bit abusive to artists to make it seem like that’s the only way to get big. There are more than one ways to try to get to the top.”

You can check out more of Kirby here on her Instagram and Twitter. Her newest record, Sis, He Wasn’t The One, is available now.