Last semester, in an effort to break up the dwindling lack of dining options on campus (partly brought on by last year’s lack of campus residence), U of L Dining had a week where food trucks from local Louisville and Southern Indiana restaurants came to campus in what was dubbed as “Food Truck Fest.” Now, one of those has a permanent home here on campus: The Celtic Piglet.

Located behind the Speed School of Engineering and right inside the Duthie Center, the Celtic Piglet carries on the BBQ and English hybrid theme of the food truck. As such, their menu features a mix of both smoked meat-based and “Celtic” in origin foods. A meal swipe includes any entree under 8 dollars, a side of either a bag of chips or fruit and a drink. They’re open 7:30 a.m. to 3:30 p.m. Monday-Friday. 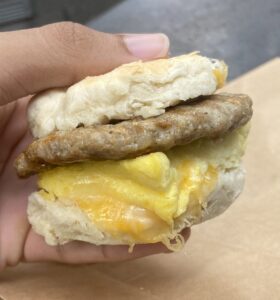 The Sausage egg and cheese biscuit

I decided to try one meal for breakfast, and one meal for their lunch. So at 10:45 on a Wednesday morning, I hiked down to indulge in a sausage, egg and cheese biscuit, since they were out of Scotch Eggs. And the results: not bad. It was admittedly small, but it was hot and a nice meal to get you through your first class or 2. The biscuit was pretty tender. But for a meal swipe (or 6 bucks a la carte), and breakfast, there are better options on campus. 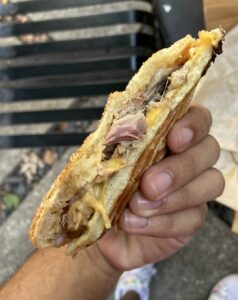 A (messy) cross-section of the “Pulled Pork Panini”.

Lunchtime rolled around and I again went back to try their sandwiches. I played it safe in getting a pulled pork panini, but this was a much more worthwhile option: tender smoky pork and Monterey jack/cheddar cheese on a pillowy sesame seed bun. I even got a brownie too, just to try it and out and it was great: nice and chocolatey, chewy, and had a layer of tacky caramel and walnuts on top. It was nice, but the issue is that again, it’s one of the only entrees you can get for under 8 dollars.

I’m not alone in this opinion- Colter Koch, a sophomore engineering student, likes the convenience of the restaurant, but is unsure about the reasonability of such prices. “Oftentimes I will grab the breakfast burrito or sausage and egg biscuit in between my morning classes. I enjoy the food a lot, but the prices in comparison to other breakfast options on campus are honestly unreasonable. Paying double for a breakfast sandwich just because it is a bit closer makes choosing the Celtic Piglet tough. I think the popularity of this spot would greatly increase if they priced their food options closer to those of other campus options,” he said.

For comparison – I’m a student in the School of Business, so it’s about a 15-minute walk to get to the place from where I take most of my classes at. Not exactly out of the way, but considering the Ville Grille or Subway is closer, and it’s about the same amount of time to get there as it is to the SAC, it can make the average student consider the value of their meal swipes.

Overall, would I eat at the Celtic Piglet again? Sure, if it was closer. It breaks up the monotony of fast food here on campus and is a good option for those looking for smaller, home-cooked-style meals, but with it being smack in the middle of where engineering students primarily are it can be out of the way for a lot of students.