The scandals surrounding the men’s basketball program have finally hit the university where it hurts — their wallet.

The university announced at the Feb. 2 University of Louisville Athletic Association meeting that men’s basketball ticket sales are $2 million under budget.

Average attendance this season is the lowest since the 2001 season when the team averaged 17,443 fans per home game and will be the lowest-attended season at the KFC Yum! Center.

Senior athletic director of media relations Kenny Klein said the program recognizes the controversies around the program and backed the fan base.

“While we realize that recent events surrounding our program have had an impact on attendance, our average attendance to date would rank among the top five in the nation and we know we have a terrific fan base,” Klein said.

Klein said the program is thankful for their fans and hopes they share their tickets if they are unable to attend.

“We’re hopeful that if fans that have purchased seats and cannot attend (they) will utilize simple digital methods to transfer their seats to someone who may be interested in attending,” Klein said.

Obtained through a Kentucky Open Records Request, the athletic department provided their official number of tickets sold, scanned and announced attendance through their home games up to Dec. 31. 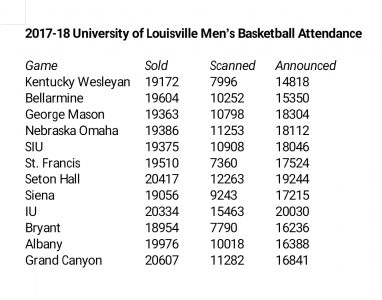 “Scanned is the number picked up from digital ticket scanning devices. Sold is the number of tickets purchased and distributed for that game,” Klein said. “Announced is an estimated attendance figure that takes into account tickets sold, passes distributed and others that may be in attendance at any one event.”

This is a stark difference from the past two seasons. 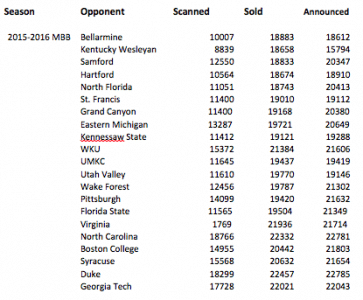 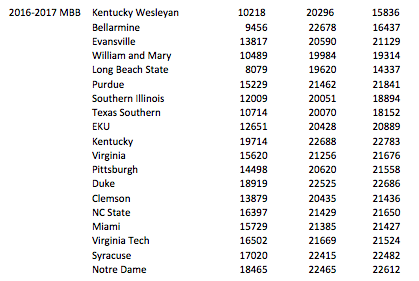 Klein anticipates more revenue to come as the year progresses.

“We expect other revenues to come for the remainder of the fiscal year beyond what was attained through the December statements noted at the recent ULAA board meeting,” Klein said.

Fans can still buy tickets to the final two home games, No. 21 North Carolina on Feb. 17 and No. 2 Virginia on March 2.

StubHub.com has single-entry ticket prices for the UNC game ranging from $40-123 for upper level and $199-300 for lower level.

TicketMaster.com has upper level tickets to the North Carolina game from $40-85.

Against Syracuse, a noted rivalry, home ticket prices were going as low as $2 on the day of the game on VividSeats.com. 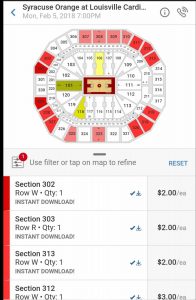 Fans are noticing the drop in attendance both in person and on TV.

Ryan Carroll, a lifelong fan, attended his first game of the 2017-18 season on Feb. 3 against Florida State. He said he typically attends five or six games a year.

“The games I’ve watched televised, there are spots open in the lower (level) way more than usual,” Carroll said.

Aidan Delaney and Collin Rauk are juniors at U of L and self-proclaimed die-hard fans. During the Georgia Tech game on Feb. 8, Delaney said the fall of attendance is a sign of attrition.

“Can you really blame anybody (for not showing up)? Everyone has been dragged through the mud for the last three years and they’re tired of it,” Delaney said. “This is their response.”

“It’s very disappointing (to see), but at the same time you understand it,” Rauk said. “Hopefully things clear up in the coming years, it’s going to be a rough couple of years.”

Louisville’s fall in attendance comes due to the perfect storm: the fallout of former men’s basketball coach Rick Pitino and athletic director Tom Jurich, no permanent head coach and athletic director, fatigue with the university’s politics and less than usual production on the court.

The U of L fan base is known to be one most of passionate in the nation. Not many schools can drop attendance by more than 3,000 fans and remain in the top five.

Despite the strong showing in a unique situation, the thousands of empty seats every home game creates a different atmosphere in the Yum! Center.

U of L routs Syracuse 30-0 in home victory