John Schnatter, former Papa John’s CEO and a trustee on U of L’s board, may be sending a message with his money.

Between him, his wife and his company and foundations, Schnatter donated $47.8 million to the university in 2016 according to donor records obtained by the Cardinal. Nearly half was from Schnatter himself.

Last year, Schnatter donated U of L and its Foundation nothing. His companies have only donated $117,182. He also curtailed donations to the U of L Foundation, giving nearly a million in 2016 and personally donating nothing last year. 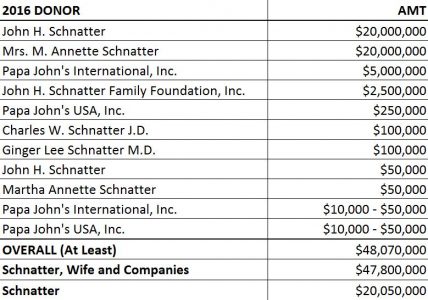 Eric Kelderman, a senior reporter for the Chronicle of Higher Education, says the slash in donations defies schools’ national trends and could be personal.

“Typically, people have relationships with universities (and) maintain those ties over a number of years, and unless they run out of money, or there’s some breach in the relationship, those ties tend to remain strong,” Kelderman said.

“This is probably a sign of dissatisfaction, frankly, with (James) Ramsey’s leaving and the way things have played out with the audit of the foundation and some of the revelations about the misbehavior and potentially fraudulent and criminal activity.”

But Schnatter was more gracious with U of L’s athletics, donating the athletic department $30,000 last year and pledging $400,000 for “stadium expansion football.” He also donated $40,480 for executive suites at the basketball arena this season.

Since he was named a trustee on U of L’s board in January 2017, Schnatter has questioned university practices.

Schnatter lambasted the U of L athletics’ leadership as a trustee on their board, saying the lucrative program is “invisible” and “sucking the lifeblood” of U of L. He later resigned from athletics’ board before criticizing policies and pay for University of Louisville Foundation administrators.

But Marcus Owens, a Washington, D.C. attorney who’s represented nonprofit organizations, said Schnatter may not be sending a message. Owens said yearly donations change depending on donors’ wealth and whether they gave assets instead of cash gifts.

“There’s not much you can really infer from just the variation in the contributions,” Owens said. “Some people give more in one year and less in another for reasons that have nothing to do with anything the charity’s doing or should do. Or they decide they don’t care for the charity quite as much.”

U of L Interim President Greg Postel and the ULF Interim Executive Director Keith Sherman said donors would likely return following transparency efforts like the Alvarez & Marsal audit. Donors signaled the return in August 2017, fronting the $2.2 million tab to further investigate the foundation. Donor support is often indicative of faith in a university.

“I think if you saw a decrease in more than one donor, that would indicate that this were part of a bigger statement about the university,” Chronicle reporter Kelderman said.

As reported in the ULF’s June meeting, the number of donors decreased last year. In the meeting, the foundation reported a $32 million drop in donor gifts between 2016 and now. By December, donations to the university were nearly half what they were two fiscal years ago.

Justin Ruhl, the foundation’s director of accounting operations, says the decrease was inflated by a one-time $20 million gift in 2016, the year Schnatter donated more than $20 million to U of L.