Blasted with news concerning accreditation standards, legislation, board shuffles and power struggles, U of L students are worried for their degrees.

A Cardinal poll showed 70 percent of respondents were worried about accreditation troubles at the university. Six percent responded they did not know about said worries. Loss of accreditation means academic degrees lose value, federal financial aid becomes unavailable, credits won’t transfer and the university cannot participate in the NCAA. Lost accreditation would not affect students’ degrees earned before it’s removed, but credits taken after would be from an unaccredited institution. 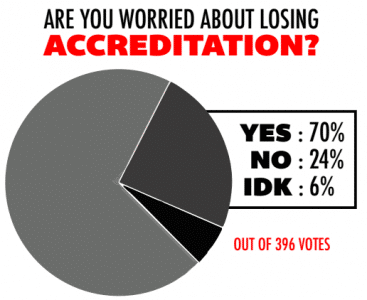 Second year law student Abigail Lewis said she’s worried, citing concerns for her younger brother attending the university and enrollment for the law school. Accreditation at the law school is separate, but Lewis said convincing students to enroll for next year has been difficult.

“It seems like the governor is gambling with a bunch of other people’s money to make a point, and that’s awful,” Lewis said. “I think there’s been some issues with numbers and applications and whatnot; so even if the law school’s accreditation might not be directly impacted by this, the reputation of the university is definitely impacting all of the organizations on campus.”

Junior civil engineering major Christopher Bird recommended increasing communication between administrators and students, saying a monthly newsletter is not enough. Regardless of his call to action, Bird said he trusts U of L’s administration.

Senior and Student Government Administration Services Vice President Lauren Greenwell is also concerned, but assured SGA is working to suggest solutions. In the meantime, she suggests administrators communicate with students.

“I’m worried because I’m obviously a student, and we all should be concerned, but I think that our university leadership has taken it into great consideration and has done all they can,” Greenwell said. “I think that when you engage with students, I think that they’re more than likely to want to want to engage back with you. I think if the administration maybe interacted more and maybe put on more events for students, we might be able to have more turn out and more people to be in the know about what’s going on.”

Like the six percent of unaware respondents, students like freshman education major Addy Fessler and freshman industrial engineer Cameron Hoover do not know full extent of the university’s accreditation status and worries.

“I just know that if we lose our accreditation, our degrees don’t matter. Right?” Fessler asked.

“(I’m) not really well informed, but it is kind of a concern that I keep in the back of my head,” Hoover said.

Almost 400 responded to the Cardinal’s poll, citing their concerns for the status of the university. Faculty teaching these students are tasked to relieve concerns.

“The fact that 70 percent of respondents to your poll are worried about accreditation shows how critical it is for the governor and the legislature to get this right and fix the problems that led to U of L being put on probation,” Philosophy Chair David Owen said. “U of L continues to be fully accredited and I am not worried that the problems created by the governor will ultimately be fixed and U of L will be removed from probation.

“However, I also believe that those of us with a stake in U of L’s success—students, parents, alumni, faculty and the entire community—need to send a clear message to the legislature that U of L’s accreditation problems must be fixed and U of L put back on a solid foundation so that it can continue to be a great research university that creates considerable value for the citizens of the Commonwealth.”

Kentucky’s General Assembly is expected to pass Senate Bill 107, likely affecting U of L’s accreditation, this week. While the bill empowers Governor Matt Bevin to remove “dysfunctional” educational boards, recommended revisions by the Council on Postsecondary Education, endorsed by the faculty Senate, are expected to complement it.