Hours after U of L and city officials announced the removal of the Confederate monument on Third Street, a handful of protesters formed around the statue in the night.

One protester held a poster reading “Racist Ramsey,” while another posted a Confederate flag and upside down American flag on the fence protecting the monument.

“Soldiers don’t fight for political reasons. We fight for the men and women around us,” Morgan said. “These men were the same way.”

City workers began work to move the monument to storage on Friday around noon. U of L President James Ramsey said it was a good time to remove the 70-foot statue because of the conclusion of the spring semester and departure of on-campus students. 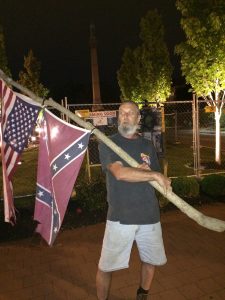