For years, drivers coming into Louisville from the South on I-65 were greeted by 22 concrete silos owned by the Solae Company.  The silos were notable for the giant lettering on their side, which read “University of Louisville.” U of L, which bought the property containing the silos for $3.3 million in Dec. 2013, announced plans to demolish the property. The silos no longer exist. 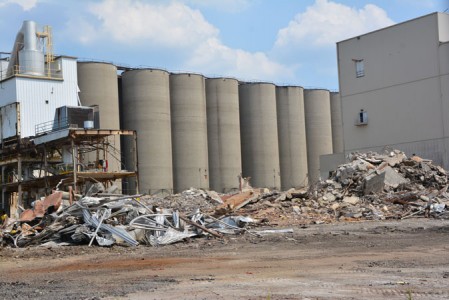 Students who tried to move into U of L’s newest housing option on Aug. 23 were surprised to find that their new home was far from complete. Window frames were leaky or missing glass entirely. Construction debris littered the uncarpeted hallways. Bathroom pipes in some rooms dripped water, but many rooms had no running water at all. Students were particularly shocked because, right up until move-in, The Grove was hyping the property. 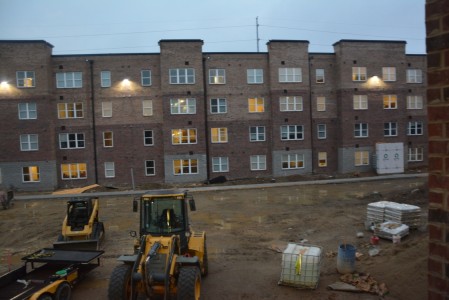 The courtyard of the Grove in August 2014.

A female student was the victim of a stabbing and attempted robbery in Old Louisville on Tuesday night. She was approached by a man near the Family Scholar House and was stabbed after being led to 5th and Hill Street.  The assailant then fled west on Hill Street. The student was hospitalized with non-life threatening injuries.

Emergency Medical Services rushed five students to area hospitals on the weekend of  Sept. 19 – 21 after campus parties.  EMS told police at least one student had been drugged while attending a fraternity party. The hospitalized student reported that she had become ill, and that drugs were not involved.

Features editor Sarah Rohleder interviewed two female Greek students tailgating before the a football game against Wake Forest. The article claimed that the Greek system encouraged students to dress up for tailgating festivities. The article created a storm of backlash from U of L’s Greek community and quickly became one of the Cardinal’s most read stories. The Cardinal published three letters to the editor from the community in response to the article.

Louisville junior Katie George is one of the top Division I setters in collegiate volleyball. As a setter, the responsibility of her position is to create opportunities for her team and to be the unsung hero on the way to success. She excels on the court, but recently took her competitive drive to new arena: pageants. In her first go at it, George has won Miss Kentucky USA and will represent U of L and the Commonwealth in the Miss USA Pageant this summer.

U of L Provost Shirley Willihnganz has officially announced plans to step down at the end of the academic year. The decision to step down, effective June 30, was announced to the university community on Feb. 4.

The roller coaster Cardinal career of Chris Jones is over. On Sunday, February 22, U of L announced that Jones had been dismissed from the team. Reports that the U of L  point guard was involved in an alleged rape at the Cardinal Towne apartments surfaced after his dismissal. Jones pled not guilty to rape and sodomy charges.

The University of Louisville received a donation of $6.3 million from the Schnatter Foundation and the Charles Koch Foundation to create The John H. Schnatter Center for Free Enterprise in the College of Business. The donation will fund two tenured professors, four doctoral fellows and staff for the center. Students will be able to take classes, attend seminars and conduct research through the Schnatter Center for Free Enterprise. Stephan Gohmann, a U of L economics professor, will become the director of the center.

Twenty-two-year-old U of L cheerleader Danielle Cogswell was found dead in July 2014 in a Cardinal Towne apartment. Cogswell, who died of a drug overdose, was found at 9 a.m. the morning after watching a movie in football player Cameron Polk’s apartment.

In April, a man’s body was found in the trunk of a car in The Bellamy. According to an LMPD spokesperson, the death has been ruled as self-inflicted. 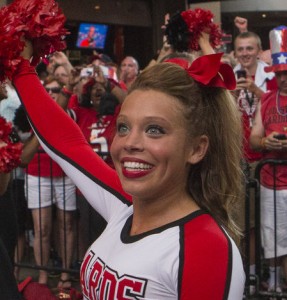