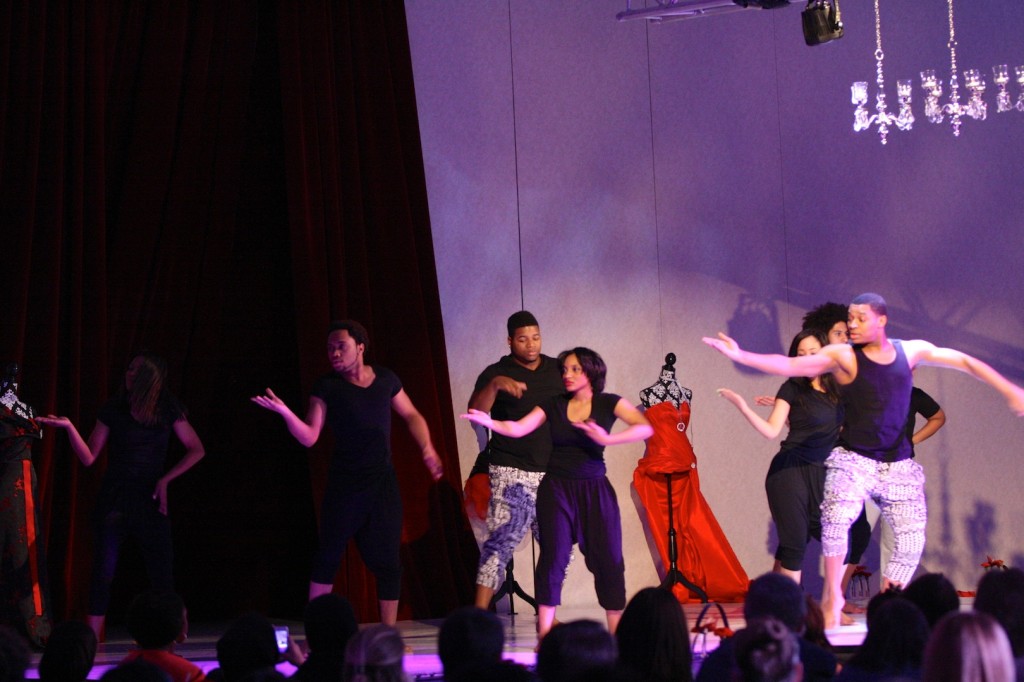 The air felt electric. With over 1000 people in the crowd, the 13th annual “International Fashion Show: Sketches in Motion” was an overwhelming success. Filled with fashion, dancing, music, food and an array of talent, our Student Activities Board, along with Ramsi’s Café on the World, sponsored the event which featured both international clothing as well as local fashion from Louisville boutiques and consignment stores. Over 60 U of L students modeled in the show wearing clothing from: Francesca’s, the Indian Student Association, Old Soul’s Vintage, and even Wolves Premium–a fashion line created by current U of L student, Kevin Jackson.

Labeled as one of most diverse events of the year, the fashion show is known for bringing together a variety of people and cultures. When asked what her favorite part of the show was, the announcer for the evening, Ashleigh Hazley, responded, “I love this event because of the eclectic mix of U of L students that come out to appreciate the same thing. It really shows the diversity of this campus, and brings students together.” That is true without a doubt.

Although the event had a rough start due to malfunctioning microphones and a one-hour delay, it didn’t take long for it to pick up speed. Kicking off the event was the Chinese Lion Dancers who “wowed” the audience with Chinese dragons as they weaved their way through the crowd. From there, the event really got into the swing of things, and before you knew it, models from the Indian Student Association were stealing the stage. “I get excited for this event,” said one student, “it’s great seeing all the models because I know them.”

It sure does add some excitement to it. Throughout the night, student models were strutting on the stage, striking poses and even taking “selfies” as they got to the end of the catwalk. Personalities were flying everywhere both on stage and in the crowd. Models threw up their “L”s and one man even twisted and combed his beard and then threw his pick into the audience!

Dancing was mixed into the show as well. The Bhangra Dance Group demonstrated some traditional Indian dances, and were met with a standing ovation. Just like the other performers in the show, they showed their Louisville pride, proudly displaying the letter “L” on their backs. Another group, the Twaa Dance Troupe, did a mix of dancing; they whipped their hair back and forth and even did the splits. The talent was incredible, and continued through the entire event.

The fashion show has been growing in size and numbers each year. Elaborately decorated, it creates an atmosphere that makes the MPR look entirely different. With a budget of $35,000 the event is nothing shy of incredible. Spencer Scruggs, a current senior, who has attended the event for years, commented, “One of my favorite parts of the event are the centerpieces! One year I even had a friend who helped design them.”

Whether it’s centerpieces or the catwalk, there is something for everyone at the International Fashion Show. Student leaders do an exceptional job planning and hosting this event and even student athletes come out to model. Backstage, the models were energized with the feel of the crowd, and although some models waited two hours behind-the-scenes to be on the stage for only two minutes, they all said the wait was more than worth it.

Even though there were some minor setbacks in the beginning, the bright lights, vibrant colors and energetic atmosphere more than made up for it. When asked how he felt about the delay and rough start, Austin Schwenker, director of finance for SAB stated, “Our biggest goal is to create a great atmosphere for the students. Even if the event starts late but there’s still excitement and energy in the crowd, then it’s a success.” Well, I dare say he’s right. The event never had a dull moment and was the epitome of diversity that left its attendees with a sense of awe at just how great of an event it was.