When did Kentucky for Kentucky start?

We started when we were both conceived by powerful Kentuckians. That’s when the seed was planted, literally and figuratively. But Whit and I went public with Kentucky for Kentucky in the Fall of 2011.

What is the goal behind the “Kentucky Kicks Ass” campaign? 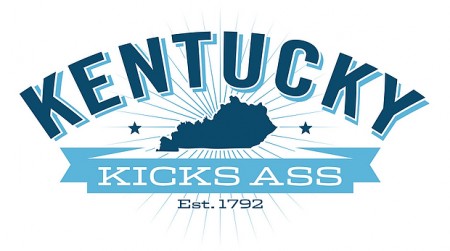 The whole goal is to make Kentucky the most influential force in the world. We would want to be the source of policy, source of culture, and the source of influence. We want people to look towards us to provide what’s next. We’re futuristic at Kentucky for Kentucky.

Who do you all use for marketing the campaign?

A lot of our content is the voice of Kentuckians. We’re crowd sourcing ideas from Kentuckians, so that’s what makes it so authentic and democratic. People in each county and all walks have life have truly inspired what we’re doing. That’s the big thing – anytime you’re doing any branding or marketing you really have to understand your audience and understand your assets because that’s the easiest way to make impact is highlighting what’s good about a place.

Have you seen any backlash from the campaign at all?

No, I think it’s been so positive and it’s made people really positive. It’s been inspirational to people, to the press, to policy makers, and to product makers and companies. We’ve provided this refreshing voice and also a really good opportunity for engagement and conversation.

What was it like being on NPR/presenting in front of the state representatives/being on BBC?

To be on those things and be recognized by those sources, it was a huge honor for us personally and a huge accolade because that’s what as people who manage brands, work to get our clients recognized. To have it validated through earned media was a huge achievement for the campaign because it elevates it to a national and international level.

We realized early on that we were on to something important when we launched the Facebook page because we had all these current Kentuckians and ex-Kentuckians offering content and support. Didn’t know that when we started it, it did happen, okay we need to keep on pushing this, and it’s an evolving and organic thing. We don’t know where it’s going to take us but we’re going to follow it.

You. I think that people that help spread the message and do the work. This isn’t an elaborate marketing campaign, grassroots marketing campaign. Person to person, word of mouth, certain influence, being able to set us up for those things. It would be hard to pick a singular Kentuckian, I love all the Kentuckians who are doing something that makes Kentucky a better place.

You’ve said before that Kentucky for Kentucky does more for building pride in residents than it does drawing tourists here. Can you elaborate on that?

I think that’s what we wanted to start within. It’s easier to market to the people you have, the customers you have, verses the ones that you’re trying to get. There’s 4 million people that live in Kentucky. We’re a mobile society, but they choose to live here, so let’s engage with them and make them our billboards for the campaign. That’s what we always say that’s wrong with a lot of marketing – they’re trying to recruit people from out of state to come visit; but we’re trying to say don’t visit, live here and invest here. Have your kids here, have your grandkids here; we want to be the beacon; it all has to be internal. Change is always internal, you can’t change from the outside in; you have to sustain change.

Why do you think “Kentucky Kicks Ass”?

I think “Kentucky kicks ass” because of the people that it produces. I think its situated and has the confluence of conflict historically, which has led to this really dynamic and divided culture and because of that, there’s a lot to offer the world. I just love it. It’s just hard to really articulate. The only thing I can do is potentially do what we’ve done through Kentucky for Kentucky – to articulate my love for Kentucky through action, and by investing I can back into it.

Students: What you need to know about voting in the 2020 election

Students come to grips with campus life during a pandemic