U of L radio station shuts down

Universities throughout the country took control of their microphones and blasted their collective voices that college and high school radio is important on College Radio Day, Oct. 2nd.  However, the microphones of UofL’s student radio station, WLCV, were silent and have been since the beginning of this semester.

The station was officially closed at the beginning of the fall semester.  Dave Horrar, advisor for the student run radio station, said, “Without being able to broadcast to a bigger audience, we were…wasting the SGA’s money.”

WLCV was “run for students by students.”  It was solely available to the public through the Internet. “I believe that students have an important voice and they need to be heard,” said Horrar.

Aimee Jewell, a senior english and communications major, said, “Students had the opportunity of doing whatever they wanted with their two hours – having a talk show, playing music, whatever they wanted to do.”  Jewell became a DJ with her own show on WLCV in the spring of 2010, during her sophomore year.

“I always envisioned the station as a place for student news, local artists to come and talk about their music (and) have students discuss what’s going on around campus,” and “the amount of good WLCV could have done is now unknown,” said Jewell.

During its time on air, the station was plagued with problems.  Horrar said, “We didn’t have a broadcast capability.  So we never had a true, real, radio station.”

“The station was only available through online stream. It wasn’t reachable on your radio dial, and it took a special download to listen on a Mac computer,” said Jewell.

In addition to a lack of broadcast capability, “there wasn’t enough interest in the students (for the station),” said Horrar.    “I think the audience has moved on.  We didn’t have the resources to compete against things like Pandora.”

John Ballard was the student representative and general manager for the station.  Ballard said, “Everything that happened we weren’t able to control at all.”  Ballard is a sophomore undecided major and got involved with the station when he started at U of L and “saw it as the building next to the Papa John’s.” 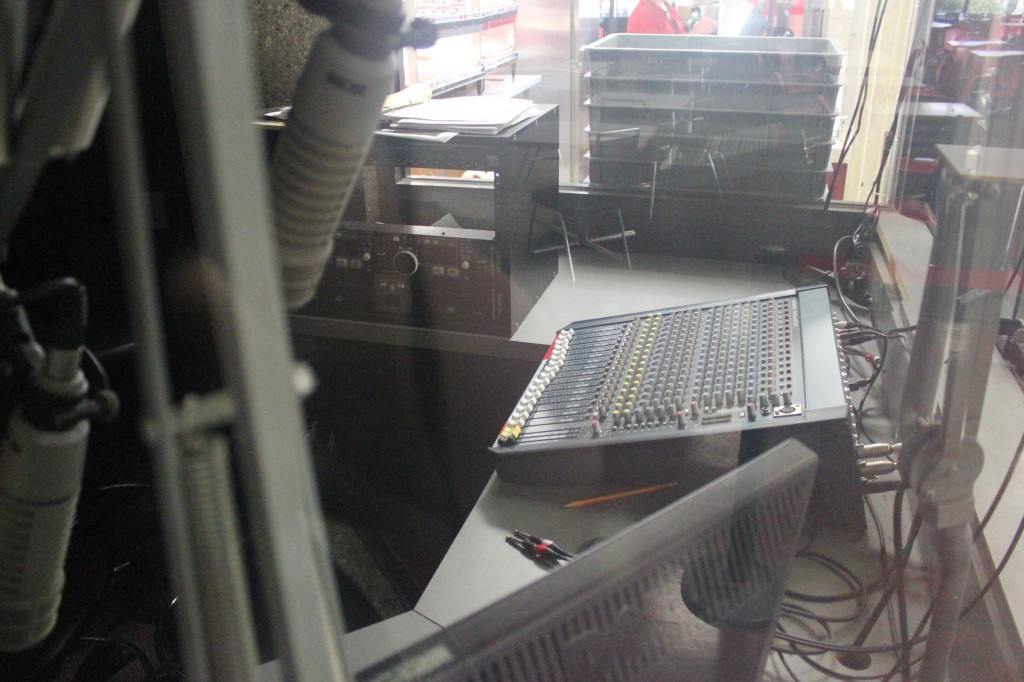 Control panels in the radio station gather dust after months of neglect. The WLCV radio station was shut down at the beginning of the fall 2012 semester.

Ballard said, “The station had to be shut down…because of lack of interest from the students, technology issues, overhead management issues and just general FCC licensing issues.” Ballard said of the station’s situation, “It was the opposite of a perfect storm.”

Before the shutdown, there were conversations if there were solutions to restore the station.  “If there was any way we could revive the station, and it just turned out that we weren’t able to,” said Ballard.

However, these conversations only included the management of the station, SAB and the head of student affairs.

“I had a show for years, had expressed that I wanted to get more involved with the program countless times, and kept getting shut down,” said Jewell, who had worked for the station since 2010.  “I feel so passionately about the radio program, that I was willing to take on the responsibility of helping this program.”

The lack of communication seemed to create a divide including the management.  Jewel said: “If we were given responsibilities, and means to carry out those responsibilities, we could have played a role in campus life. We could have told about upcoming events, interviewed student leaders, and DJed campus events. But because we were not given the responsibilities to do so, or the means to do so (funding), nothing could be done.”

Hannah Kellogg, a sophomore studio art major, was also a DJ for WLCV before it was shutdown.  “I feel like the station brought on a lot of curiosity amongst my fellow students in the sense that they either wanted to plug in and listen, or partake in it themselves,” said Kellogg.

Kellogg became involved with WLCV after the suggestion of a friend.  She described her role in the station as “to play whatever music was on the agenda of the vibe for the day.”   The WLCV DJs had some creative freedom when it came to their hour of radio.  Kellogg said, “I also made it a point to cast songs by local artists, as well as artists that were coming to the area.”

Concerning the shutdown of WLCV, Kellog said: “I received a vague explanation as to why the station came to an end, and I regret that it did. I thoroughly enjoyed it, as did all my listeners.”

After enduring several challenges, some of them expensive to the budget, WLCV was closed.  “The general director and I talked it over from time to time and decided that the market has moved on,” said Horrar.

Ballard describes the crux of the decision.  “It all came down to how best were we able to serve the university, and it came to the point where we really weren’t able to,” said Ballard.

Some seem to think the decision needed more time.  Jewel said, “I just think it needed to be fought for.”

Jewel saw the potential positive effects the program could have done.   The “program could have enhanced the musical community, as well as the community knowledge of the student population, but it was either put in the wrong hands or not given enough of a chance,” said Jewel.

Horrar said of the shutdown, “We had this available for them to express themselves and communicate with the community and it was just not being used.

Although so many believe that the presence of student media on campus seems to linger in a precarious state, Ballard said, “I believe in student media.”

About the Author: Aaron Bacon