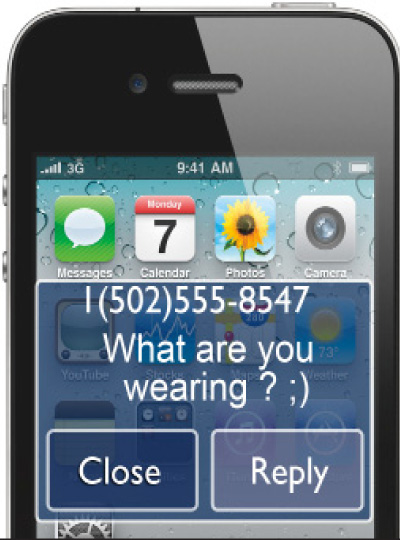 Emoticons and text jargon – they’re not entirely uncommon among college students.  Slipped into casual conversation, emails and – sometimes – term papers, the language of texting has become a part of everyday life for most young adults.

However, every once in a while, people send a different kind of text message.

In a recent study by the National Campaign to Prevent Teen an Unplanned Pregnancy, 59 percent of young adults admitted to having sent sexually explicit text messages. Called ‘sexting,’ the trend is spreading among college students in the United States.

According to some, the students of the University of Louisville are no exception.

According to Dr. Michael Cunningham, a professor of communication at U of L, the changing definition of relationships may be a possible reason for the high rate of sexting among young adults.

“It’s kind of like sex – or rather, an emotionally safer form of it,” said Cunningham. “It’s a way to connect without having to really put yourself out there, kind of like Facebook.”

In their recent publication, “Sexting: Text Message Dependence and Intimacy Among College Students,” Dr. Michelle Drouin and Carly Landgraff of Indiana University – Purdue University’s psychology department, noted that this change in how people communicate may be largely responsible for the spike in sexting.

“Sexting appears to be more common among those who are dependent on text messaging to communicate,” wrote Drouin and Landgraff. “[It appears that] those who engage in sexting may feel a need to stay constantly connected to individuals.”

While Cunningham said that there may be less interpersonal risk involved when sexting, he also noted that the possible ramifications of sending sexually explicit videos and pictures through text or email might be severe.

“What [students] need to keep in mind, is that this is digital,” said Cunningham. “Whatever you put out there will probably stay there. It might even spread.”

A large percentage of sexting is in the form of digital photography. 33 percent in the NCPTUP survey said they have sent explicit images and videos via text message.

“Electronic media has the potential to last forever and to be circulated endlessly,” said Cunningham. “If you happen to be hooked up with someone who is more interested in status with their peers – or if they’re really stupid – you could completely lose control of your privacy.”

Sexually explicit photos and videos sent while texting may be posted to sites like Facebook, MySpace and Photobucket without the sender ever knowing.