Three counts of “wanton endangerment” were the only charges filed in the case of Breonna Taylor’s death on March 13. When a Kentucky grand jury and Attorney General Daniel Cameron confirmed on Sept. 23 that those were in fact the only charges for officer Brett Hankison, a reasonably upset city took to the streets to protest for justice.

The city countered by reimplementing a 9 p.m. curfew from Sept. 24 to Sept. 26, with those not abiding the curfew being taken into police custody.

Among those arrested on Sept. 24 were University of Louisville McConnell scholar and sophomore Ashanti Scott and her mother, state representative Attica Scott. They were held o ernight, along with local activist Shameka Parrish-Wright. 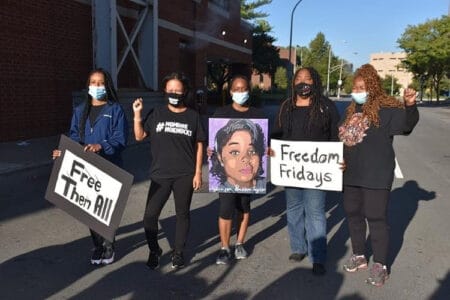 “We had been driving by one of the marches that happened, and then LMPD cut us off. We got out of the car because we thought we’d be arrested for still being in our car during curfew. We had walked to this church that Rep. Lisa Willner was a part of because they held sanctuary there,” Ashanti Scott said, speaking about the First Unitarian Church, which offered protesters sanctuary that night.

“We were walking towards the front of the library, along Broadway, but to try and avoid confrontation with the police we turned and tried to go around the church. When we came to the back police yelled ‘Surround them! Get on the ground!’ and we were detained.”

According to both her account and Rep. Scott’s Instagram Live footage, they were then held down with zip ties around their hands.

“One of the others we were detained with asked the officer if they were going to read us our rights. They said no, and so I was never read our charges,” Scott said. “I didn’t even know our charges until later on while in jail. When we finally did know, even the officer that showed Ms. Shameka her charges said ‘this was crazy,’” she said.

Unable to see their bond, they were eventually released at 8:30 a.m. the next day. Their release papers showed that they had a riot 1 felony, unlawful assembly misdemeanor, and failure to disperse misdemeanor.

After Attorney Mike O’Connell and Thomas Wise initially refused to drop said charges, the Scott’s started a #dropthecharges campaign that gathered moderate interest on platforms like Twitter from various U of L groups and local officials/activists.

“I don’t think they’re necessarily being indifferent. I think it’s a strategy by LMPD. My mom has introduced Breonna’s Law (an ordinance banning no-knock warrants unless in the situation of child endangerment), and I think it’s just a way to silence her,” Scott explained.

Scott said she wasn’t surprised by the decision of the Taylor case.

“I feel like just charging him with wanton endangerment, for shooting into the apartments, it was crazy to me that that happened,” she said. “[Hankison] spent less time in jail than what I did. I think the Breonna Taylor case is the most corrupt case we’re seeing involving the murder of an innocent black woman and someone actively trying to cover it up.”

Scott, who went to middle school with Taylor’s sister, explained that she thinks the severity of this case, in particular, is likely caused by Mayor Fischer’s gentrification plan for Taylor’s neighborhood and was compounded by the COVID-19 pandemic/support of healthcare heroes. She initially only found out about Taylor’s death from her family’s social media.

As of Oct. 6, the charges against the Scotts and Parrish-Wright were dropped by O’Connell due to a “lack of evidence.” And while Ashanti was disappointed by the university’s response to the Breonna Taylor case and the Black Lives Matter movement beyond a few emails, she did have some sage advice for those getting involved.

“This movement involves a lot of young kids who are angry, and justifiably so. We just have to be able to work with them. If you can’t protest, the Kentucky Alliance Against Political Oppression is a great organization to donate to, as well as the Louisville chapter of the Bail Project. There’s also a lot of petitions still circulating.”