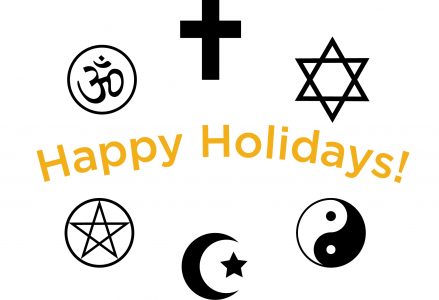 Happy Holidays! Yes, it’s the holiday season and saying “Happy Holidays” does not make me anti-Christian, atheist or too politically correct. You’re actually being inclusive and American by using that phrase instead of only “Merry Christmas.”

There are millions of people in the United States that are not religiously affiliated and a few other million that are not Christian. That means America has a beautifully diverse group of people that celebrate different holidays.

Also, America doesn’t have an established national religion, and that’s why the promotion of Christmas in public settings and government institutions has been a controversial hot topic.

There are people who argue this controversy is part of a larger “War on Christmas.”

Last year, President Donald Trump vowed to make Americans say “Merry Christmas” again on several occasions. Before his tenure, the Obama family was repeatedly criticized for not mentioning Christmas in their annual holiday card. This “war” has been used by mainstream media to continue the division and tribalism among Americans. However, it’s not working.

In a country where Christmas is the most celebrated Holiday and the majority of the population is Christian, Christmas isn’t going anywhere. The phrase “Merry Christmas” isn’t either.

In the past century, Christmas has actually become a more secular and consumerist holiday, meaning many people are celebrating Christmas without a religious affiliation to Christianity.

The Pew Research Center found that 90% of Americans celebrate Christmas and only 25% of Americans are bothered by the cultural shift of the holiday season.

This is because the holiday season is a fun, joyful time that is supposed to unite us as people instead of dividing us. There are many people who don’t celebrate the Holiday that are not offended by a hearty “Merry Christmas” greeting, but we must be emphatic and careful because there are people who might be.

The big emphasis on Christmas can make some people feel marginalized or disrespected because their cultural or religious celebrations are ignored and underappreciated. Sadly, we live in a country where there is a multitude of cultures that are not only ignored and underappreciated, but also threatened due to a constant presence of white-nationalism and anti-Semitism.

That’s why we shouldn’t worry or feed into “War on Christmas” or “Happy Holidays” versus “Merry Christmas” nonsense. A lot of it is masked white nationalism and anti-Semitism that refuses to accept we live in a diverse country where our neighbors have different cultures and beliefs.

So I’m not going to argue for you to say “Happy Holidays” instead of “Merry Christmas.” Instead, I want you to realize that you can say whichever you like, but be emphatic and realize not everyone celebrates the same thing you do.

So instead of potentially hurting someone’s feelings in this season filled with joy, take the opportunity to be inclusive and wish them happiness for the whole season.

We have a responsibility to give back to our community

Students should get involved to find their college family