The tune of college athletics is often taken for granted. The sound of the band is married with every touchdown, basket scored and big-time play. Yet people often don’t give the band much thought.

Furthermore, many people don’t know the distinction between the marching band and pep band. While the differences don’t seem like much to the uneducated, the distinction is stern — and the two groups will let you know.

The pep band entertains fans at basketball games, softball games, swimming meets and everywhere in between while marching band takes the spotlight at football games. 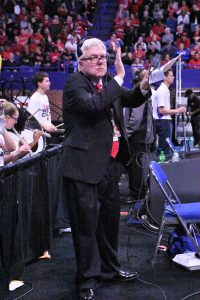 “In less than 11 years, we have played over 1,400 performances,” Greener said. “We have very dedicated kids and they do a great service for the university.”

Greener has been at the university off and on for 30 years and took over as the pep band director in 2007. Since then, he has seen the growth of the athletic department and university as a whole.

Greener’s pride and passion for U of L is evident when he speaks on the school. His love and knowledge of the teams line up with the most die-hard of fans. The emotion Greener possesses for the team is infectious and it bleeds over into pep band members.

The pep band has a swarming mentality when they need to cover an event.

“I consider our band a fire department mentality. We need X amount of people here, sign up … if you can do the job, fine. If you can’t we have plenty of people,’” Greener said.

Beyond school pride, Greener sees the pep band as a learning experience.

“Down the road … there are going to be times you have to do something but you have to answer the bell,” Greener said. “(The pep band) also teaches people to be on time, teaches them to be accountable. Plus, they get to see first-hand high-level athletes and be their soundtrack.”

Lessons are handed out left and right while in pep band, but traveling is the one experience that can’t be replaced. The band will go to road games, men’s and women’s basketball conference tournaments and NCAA tournament games.

Through Greener’s 30 years of teaching, travel is the most important. The band experienced the true nature of traveling in 2013 when both the men’s and women’s basketball teams reached the national title game.

“Kids get out of their comfort zone,” Greener said. “I think we had 31 nights in hotel rooms … you can’t make memories like that outside of this.” 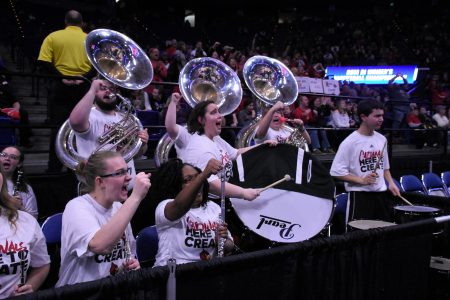 For senior graphic design major Rachel Suding, the pep band has allowed her to travel and experience some of the school’s biggest moments in program history.

“My first NCAA tournament trip was to Seattle in 2015 during my freshman year … I got to explore a beautiful city that I had always wanted to visit,” Suding said. “This year, I went to the ACC Women’s Basketball Tournament and watched our team win it all from the front row of our section. I’ll never forget the feeling I had as the clock ticked down, the balloons dropped from the ceiling and confetti shot out of the cannon next to the band.”

Suding is a four-year member and said pep band showed her how much work goes on behind the scenes of college athletics.

Beyond the in-game experience, the pep band has opened doors for Suding.

“I’ve gotten a lot of great opportunities and experiences here that I wouldn’t have at any other school I’d considered attending, including the job I have waiting for me after graduation,” Suding said.

“Al is a really great leader and part of what makes him so great is his passion and love for U of L. … He really cares about his students and wants only the best for all of us,” Suding said. “There is no better person for the pep band director position than Al.” 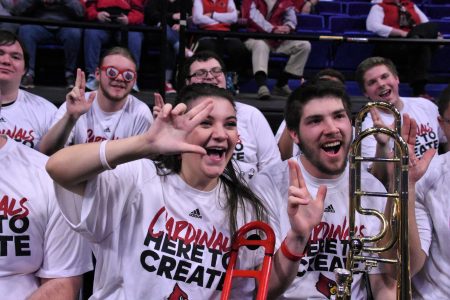 Graduate student Pauline Ottaviano is now in the master’s program in sports administration after receiving her bachelor’s degree in jazz. She credits the pep band for opening doors for her.

“Pep band has honestly been the greatest thing that has happened to me at U of L,” Ottaviano said. “It has opened door for me I couldn’t have ever imagined and friendships I’m forever thankful for. Without pep band, I wouldn’t have settled into the SPAD graduate program which I love.”

Ottaviano called Greener an “incredible mentor” that not only made her a better band member, but a better person.

Former member Jared Anderson spent three years with the pep band. Now an alumnus of the university, Anderson still feels a connection with the band. Just the phrase, “University of Louisville pep band” strikes of the “best years” of Anderson’s life.

“The first thing that comes to mind is the countless friendships I made and the memories I made with those friends. We spent so much time with each other it often felt like we were a family,” Anderson said.

The experience of college athletics is often only thought to be shared between the coach and student-athletes, but it goes beyond that. Pep band members are some of the most dedicated involved with any program.

U of L Swimming shows off at Louisville Invitational

2 thoughts on “The unsung heroes: University of Louisville pep band”