U of L wrapped up a two-day special committee visit from the Southern Association of Colleges and Schools Commission on Colleges today. The committee will decide if U of L’s SACS probation should be lifted and accreditation continued.

“We had a very productive visit with the committee, which included individuals from six other accredited universities. Over the past three days, they asked many questions, and we were able to answer that we had addressed most, if not all, of their concerns. In our wrap-up session, they were very complimentary of the work we had done to address their issues and to position the university for the future,” Postel said.

SACS Vice President Michael Johnson told the Cardinal being placed on probation is less common for public institutions than private ones. Over the past year, U of L racked up nine possible violations with the accrediting agency.

Since that time, U of L administration has worked to address the problems cited by SACS. Johnson says trying is not enough. 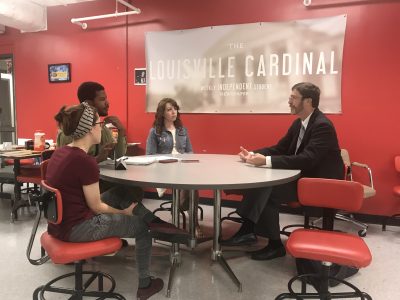 If U of L is out of compliance on even one standard, probation could continue, possibly resulting in another committee visit next year.

Overseeing 800 institutions, SACS learns of the possible violations through the Chronicle of Higher Education or university self-reports.

After reviewing, SACS determines if an institution is out of compliance. SACS authorized a special committee to visit U of L earlier this summer.

The SACS board will review the committee report then decide U of L’s fate in December.

“At that time they have options other than “everything’s okay” (and) “you’ve lost your accreditation”—there are options in between. U of L isn’t at a point where those are the only two options,” Johnson said.

While Johnson wouldn’t comment on U of L’s chances of losing accreditation, he could think of only one public institution that lost accreditation. In June 2016, the City College of San Fransisco was reinstated as an accredited school after nearly five years of dispute.

Johnson said the duration of the committee’s stay is determined by how many people will be interviewed. The list of interviewees was not released.

Governor Matt Bevin was at the University Club this morning. Calls to Bevin’s office went unanswered.

“I think there’s a chance he may have spoken to the committee. I probably do (know what it was about),” Johnson said. He said a governor being interviewed for a public institution is not unique.

“It ends up being one of those cases where it is what it is, and it’s the institution’s obligation to establish compliance and I know they’re working very hard towards that goal. All I do is wish them success,” Johnson said.

Interim President Greg Postel said earlier he believes U of L will have a good idea of where they stand today, but the university has declined any comment on the meetings per SACS.

U of L begins search for new provost