Crystian Wiltshire took the Central Park stage as one of the most recognizable characters in English literary history, Romeo Montague. Wiltshire plays the role for the Kentucky Shakespeare Theatre Company’s annual Shakespeare in the Park series. While holding three different roles in an almost-nightly play series, Wiltshire finished his University of Louisville career with a degree in English and a minor in (unsurprisingly) theatre.

Wiltshire stopped by to share how he balanced three plays, graduating college and binge-watching “Game of Thrones” with TLC.

Q: How did you get into theatre?

A: In Germany in seventh grade, because my mother’s in the military. My guidance counselor asked me if I wanted to take cooking class or theatre, and cooking class didn’t sound like the way I wanted to go. My theatre career has been steady since the seventh grade—Virginia Beach, New York, where else? All over. As a military brat, you move around a lot, and wherever there is theatre, I hop in. Wherever I go, I try to seek out the arts community.

Q: How did you break into the Louisville arts community?

A: I came here four years ago. Before, in North Carolina, I did no theatre whatsoever. I worked at a call center and got pretty frustrated that I hadn’t gotten into the arts community, so when I got here, I made sure to get back into theatre. When I came here, I was a transfer student from Norfolk State University. I walked into the theater just to check it out and saw an audition notice. I showed up, I got a small role and knew I didn’t just want to act, I wanted to be a part of the theatre department—which means not just acting, but working offstage too.

Q: Who are some influential people who facilitated your growth in theatre at U of L?

A: It’s hard to single anyone out. Charles Nasby, Baron Kelly, Daniel Hill, Nefertiti Burton – that’s just some – the graduate students, and all the hard-working undergraduates who work in the scene shop. All those people accepted me into the theatre department and molded me into the professional that I’d like to think I am now.

Q: What are your next steps?

A: I’m not going to grad school right now. This is my last week in Louisville. July 24 is my last show, then I have to report to the Cincinnati Shakespeare Company for 10 months.

Q: How did you get involved with Kentucky Shakespeare?

A: Last summer, because of Charles Nasby. He has a relationship with Kentucky Shakespeare where he brings students to learn how to do work backstage as part of a professional theatre company. Last summer, I auditioned and didn’t get anything, but he gave them my name and I became a stage management and sound intern. It made me really appreciate being onstage and showed me the daily grind you have to put in to get there.

Q: How was going from where you were last year with the company to getting a lead role?

A: Quite the jump from a year ago. Starting in February, we took a seven-person tour version of “Romeo and Juliet” around Kentucky parks and schools and I was Romeo in that, so I’ve kind of had this role with me for a while. When you have a group this talented around you, it’s not as difficult as you’d think. Between me being up there with this cast and the scenes where I’m doing these monologues to the audience where I’m using the audience as a scene partner too, I’m very rarely alone onstage.

Q: How do you balance finishing your last class, three shows and taking care of yourself?

A: Any pressure that comes with that, you combat it with preparation and work ethic. It sounds cheesy, but it’s true. I’m always surprised at how much time there actually is in the day. Between trying to finish school and do the shows and prep for my next show in Cincinnati, I’ve still found time to binge watch “Game of Thrones.”

Q: In the future, what do you think you’ll look back on from your time here?

A: The networking I’ve been able to build at this school is something I wouldn’t have been able to build on my own. I’m getting ready to venture out of this city as an actor. I’m going after this based on the network, the experience, that started at this school—in this city. I love Louisville. The educational director at Kentucky Shakespeare told me there have been plenty of actors that venture out, but they always end up back here, and I can see why. There’s so much to this arts community—so many ways to make a living as an artist in this city.

Q: What do you love about your role as Romeo?

A: The amount of hard work that goes into rehearsals and the crew working every day in the heat on these sets to make sure the audience gets a good show. We’ve performed to 15,000 people this summer. With the popularity of “Romeo and Juliet,” audience members have said “I want to see ‘Winter’s Tale,’ I want to see ‘The Gentlemen of Verona.'” With what we’re doing, with the Montagues being African-American and the Capulets being white—an older company member told me he can’t remember seeing more than three black actors on the Central Park stage, so it was special to be part of that. Thinking about the racial tension happening in our country right now, we didn’t plan on all these unfortunate events happening in Dallas or Baton Rouge, and what has happened and what will continue to happen. Being able to address that onstage today with a play that is over 400 years is powerful.

Q: Is there anything else you would like to share about U of L, Kentucky Shakespeare or yourself?

A: Playing Romeo has allowed me to be put into this position to talk about my time at U of L and with Kentucky Shakespeare. I’d like to let it be known that there are so many people at the theatre company from U of L. That product you see on the stage has been put together by so many people … I’m just trying to say that this is so not just about me. There are so many cast and crew members who have been at this university that the relationship is vital to Kentucky Shakespeare’s success and I hope that continues, because without it, I wouldn’t be here. 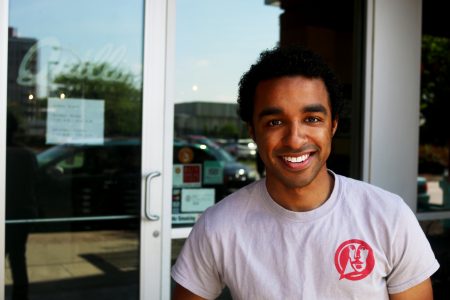 Despite not being able to meet, RSOs are still finding ways to engage