Representatives from Sons of Confederate Veterans and United Daughters of Confederates testified for the statue to remain. But emphasizing the importance of law over emotion, and saying there was not reasonable evidence to prove the monument belonged to the state, McDonald-Burkman struck down the plaintiffs’ lawsuit and motion for an injunction.

“This is a victory,” Pan-African Studies Chair Ricky Jones said outside the hearing. “There are a lot of battles to be fought but this one is very important for the University of Louisville, faculty, staff and students having a more humane place to work.”

Fischer released a statement saying his staff will evaluate the best way to remove and store the statue, but no actual dismantling will begin until McDonald-Burkman issues a written ruling on the suit.

Jefferson County Attorney Mike O’Connell fought against the restraining order this week, filing a motion against it Monday. O’Connell said Fischer has the authority to move the monument, regardless of Corley’s suit saying otherwise.

Unless the plaintiffs appeal the ruling, movement of the statue will continue.

“Hopefully somewhere down the line, right reason and good sense will prevail and the monument can be saved,” the plaintiffs said after the hearing. “If not in that location, (then) in an appropriate location.”

“The mayor said from the very beginning that it’s going to be dismantled carefully. They’re bringing in national experts to do this,” O’Connell said after the hearing. “It will be preserved until he finds a suitable place to relocate it and re-erect it.” 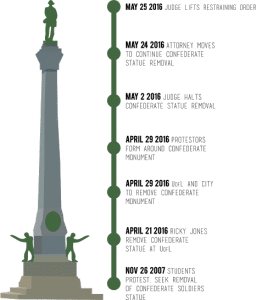