Despite multiple students believing they could not speak to the press, students in the honors residence Threlkeld Hall say racial tension continues, despite multiple meetings and hall activities about the problem.

The incidents began in October. One student said they heard another student comment in the hall’s lobby about another resident receiving a scholarship solely because of race. According to Threlkeld resident Hannah Esrock, discussion turned to the hall GroupMe. Race-based discussion continued in the group, expanding to Donald Trump, white privilege and President James Ramsey’s stereotypical Mexican Halloween costume and the backlash it received. One student uploaded a photo of someone in black face, with a comment that it looked like someone in the residence hall.

“I was like, ‘We need to shut this down,'” said Esrock, who initially began the group chat to meet people in the hall prior to sorority recruitment. It grew throughout fall semester to include several hall residents. The “bad guys,” Esrock said, simply made a new GroupMe, which they refer to as the “Grown Up” GroupMe.

The Honors Service Living Learning Community, which focuses on social justice and is housed in Threlkeld, held multiple meetings discussing the incidents with the cultural center during this time frame.

According to Esrock, the “exclamation point” of the series of incidents happened around the semester transition. Multiple derogatory messages were written on a common-area whiteboard in the men’s section of the residence hall. Messages included the n-word and a drawing of a swastika. 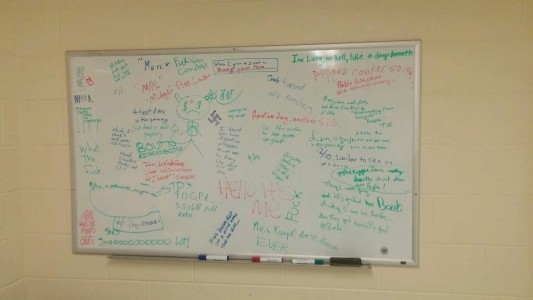 The whiteboard in a common area of Threlkeld.

The whiteboard incident led to a hall-wide meeting on Jan. 3. There was discussion of making Threlkeld a better community, but there were also comments how some “cannot take a joke” or they should “just pretend like it was nothing,” according to residents.

Residents John Rhodes and Nuri Thompson said there were offensive side comments made, and the training exercise on stereotypes did not help. They said residents were split into groups, assigned a race or ethnicity, then wrote stereotypes and facts about them. Groups critiqued each other based on validity of the statements.

Thompson spoke in the meeting, but was publicly rebutted by the “Grown Up” GroupMe’s creator. Both had a private meeting with graduate hall director Makayla Moore, where Thompson said no one held the other guy accountable despite his history of minority issues. Thompson would not release the name of the other individual.

After increasing pressure on officials and residents, a note about the Threkeld situation went viral on social media Feb. 16.

“The on-campus residence housing Threlkeld Hall has segregated,” the post read. “It’s whites against minorities. White students in the residence have told minorities that they don’t belong in the dorms nor on the U of L campus!! Racial slurs have been written boldly for minorities to see.

“There has been no communication about these events to students, staff, nor the public,” the post concluded.

Esrock said the post is not very accurate, but it spread through social media, inciting several angry students who did not live in the hall. Some residents began drafting a report of issues, along with suggested ways the administration could help.

Dean of Students Michael Mardis and Vice Provost of Diversity Mordean Taylor-Archer sent an email to all Threlkeld residents Feb. 17 “to clear up misinformation being spread through social media.”

“The University is taking these incidents seriously and has taken action to respond,” the email said, saying officials responded immediately once they heard of the incidents. “We have discussed these situations with the students who have been disturbed or negatively impacted, as well with students who were identified as initiating the incidents. There are ways to engage each other in difficult conversations; our goal is for this communication to be productive and respectful.”

Mardis and Taylor-Archer said staff trained RAs over winter break on “racial and ethnic stereotypes and broadening awareness.” RAs were told to alert concerned students they can bring formal allegations and offer them the opportunity to move to another residence hall. They said they have also met with faculty, staff and groups of students.

“We are continuing to take steps to improve the climate in Threlkeld,” the email said. “We need and encourage your input with the hope of using this as an educational opportunity.”

Esrock said residents were told by housing officials multiple times they could make reports. “Some are like, ‘Why do we have to made a report when this is clearly going on,'” Esrock said.

“If the aggrieved students desire to go forward with Code of Student Conduct charges, the university will investigate and take appropriate actions. Our student well-being is our top priority, and we will continue to work to create an environment where students can thrive and be successful,” Mardis said.

Esrock also said no one has moved, but some are thinking about it, hesitant due to a “why are we getting punished” mentality. Housing officials and U of L administrators have attempted several times to handle the situation, but Esrock feels they have been “dancing around the issue.”

“Although steps have been taken, we acknowledge that the issues have not been fully addressed. I am committed to push for an expeditious resolution to this issue,” Taylor-Archer said. “We need to implement mandatory and effective diversity training for the residents of Threlkeld Hall and there must be consequences for those students who exhibit egregious behaviors.”

“As far as I know, administrators have had knowledge of this situation for some time,” said Pan-African Studies chair, Ricky Jones. “They once again chose to handle it in a closed manner. I was only contacted once it was made public. I always disagree with secretive processes and have grown frustrated with the continuous commitment some people have to engage in them. I think they are unhealthy. I will not intervene or help clean up this situation. I will allow the officials who began it to finish it.”

Another meeting was held on Feb. 18 to discuss the situation, this time for the second floor of the male side of the hall, where the whiteboard incident happened. Moore said the whiteboard would be the only thing allowed in discussion. According to Thompson, some residents tried to justify the derogatory messages as “just jokes” or that they were “tired.” Thompson said counterarguments were ignored by discussion leaders.

“When other students brought up how, regardless of what their intention was, how what was written and how the language they used was impactful and offensive to not only them, but also to other students who have seen this not just inside of Threlkeld but also in terms of pictures and how this is contributing to the hostile environment, those arguments, those claims were completely ignored,” Thompson said.

“It was a productive and positive meeting in which all students were invited to share their concerns,” U of L spokesperson John Drees said when asked about the meeting. “The residents of Threlkeld offered several suggestions to help improve the environment.”

The overall tone and message of the meetings did not sit well with some.

“As long as we lead by example as defined by continuing to coexist and be nice to each other, we will overcome these problems of Threlkeld,” Rhodes said. “It’s like this huge rallying cry for all of the men of Threlkeld to band together and be one. Like one big football team, we are all rallied into the huddle and charge to go get the touchdown.” The Feb. 18 meeting ended with a group photo of the floor.

“Although limited to a relatively small number of students, any instance of disrespect and animosity is a cause of concern for all of us,” Pinto said, adding U of L plans to add and improve diversity training in student programming.

“We will learn from this and other incidents, and we will use our learning to continue to build a community where someday such instances simply won’t happen,” Pinto said.

Multiple students coming out of Threlkeld this week told The Cardinal they were told not to speak to media. Esrock said RAs told students not to talk or post about it, but Drees said the RA was incorrect and was quickly corrected in a hall-wide email.  However, several students spoke under the condition of anonymity.

“I don’t feel comfortable in the lobby, in my dorm, my home and it is my home,” one resident said. “I am tired of people at this dorm who find us problem people. We are not the cause.”

“Stop making sure everyone is comfortable, including the people who caused it and deal with the issues,” one resident said. “Ask the questions and get to the point because we have proof.”

“I do not know if the university has my back on this. They have their back. They do not have our interest at heart like they make it seem,” another resident said. “I am afraid that if something racial is said and I blow up, I will get kicked out.

“They tell us to hold back and save face but they get to keep red as the devil and say whatever they want,” the resident continued. “I do not want to hate anybody. I do not want to fight. It is just hard when you have that distinct separation of dealing with issues and people wanting to avoid those issues. I am just exhausted.”

Full disclosure: Hannah Esrock, quoted in this story, is a contract writer for The Louisville Cardinal.