A “vicious” work climate in the College of Arts and Sciences has prompted Ricky Jones, chair of U of L’s Pan-African Studies department, to call a meeting Monday to discuss the work culture at the college.

Jones wrote a column, “Why UofL is becoming a bad place to work,” which appears in LEO Weekly on Sept. 16, three days before the A&S State of the College address. He questions administrative appointees and says that faculty and staff feel vulnerable and threatened in A&S.

One recent appointee is Kimberly Kempf-Leonard, who became dean of A&S in August 2014.

“I think the leadership style in A&S is certainly different,” said Jones, when asked about Kempf-Leonard. “To put it diplomatically, there is a concern about fit for the college. Every position goes through growing pains, obviously, but I’m not sure how widespread the sentiment is.”

Faculty and staff have been able to make change at U of L, and Jones said that the situation in A&S could be similar to the circumstances that led to the resignation of former College of Business dean Carolyn Callahan.

“This could be a university problem, when I talk about ‘fit’,” said Jones, citing the vote of no confidence Callahan received from the COB faculty, who left the job after less than a year.

“These concerns are not unprecedented,” he said. “When people talk from this position of fear and powerlessness, they are really not aware of what faculty and staff options are. You’re talking about something that has happened at the very same university at the college that’s right across the street from our building.”

In a statement to the Cardinal, Kempf-Leonard said that she and her staff are doing their best and that the focus should be on A&S students.

“I would like to reassure the U of L community that I am trying my best every day to help the College of Arts & Sciences, and I believe that’s also true of my staff and those in central administration,” she said. “Our focus must always be on student success.”

Kempf-Leonard said that one source of the tension may be the many budget cuts to higher education faced by U of L.

“Some of the frustration we all share is due to the very tight fiscal climate in public higher education, including U of L, where there have been 14 years of consecutive state budget cuts,” she said.

Jones said that there was no individual event that sparked his column or the frustration between administration and faculty and staff in A&S.

“It’s really a culmination of things that have happened over the last year or so where I’ve seen a dramatic shift of the college,” he said. “In conversations with people who I’ve worked with for a very long time, there’s just an air of negativity. So it’s not one thing, it’s been a series of things that have gone on, and I find the climate pretty negative.”

According to U of L, Jones is free to speak his mind about the alleged problems.

As a remedy to the issues he sees arising in A&S, Jones, in an email (pictured below) to A&S faculty, called for a meeting of faculty and staff in the Chao Auditorium on Monday, Sept. 21 to have a discussion about the issues. 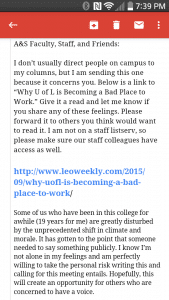 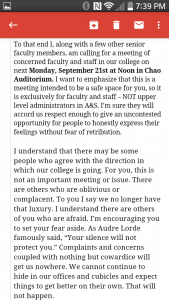 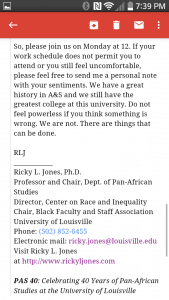 “Instead of thinking that my sample size of people is the only version of truth that we have here in the college, I want to give folks an opportunity to get together and talk about it,” said Jones. “We’re going to see where we go. It is a preliminary meeting. It is literally a meeting to see how many people show up and see how many people feel that there is a problem.”

According to Jones, in the few hours after sending the email, he received notes from faculty offering thoughts and expressing fear at speaking out publicly.

The fear, he said, likely stems from concerns about job security and the work environment.

“People don’t want to come because they think they are going to be labeled,” he said. “One woman said to me, ‘The approach to staff here is we basically do what we’re told or find somewhere else to work.’ She went through a long list of actions of feeling unappreciated, powerless and she literally said ‘I will come if I have the courage to.'”

As to whether the feeling is widespread in A&S, Jones expressed hope that the meeting would offer an idea of how far the sentiment goes.

“If there are five people there–but I’ve talked to a whole lot more than five people–people who are pushing back and saying, ‘No, I think you’re totally off, that’s not really what’s going on,’ that means I have talked to every disgruntled person in the college and that I’m wrong and it’s just my perception,” he said. “I’m going to bow to the will of my colleagues.”

However, he added that if his feeling was correct, he hopes to express the concerns of the A&S faculty and staff in an organized way.

“If they feel that something is wrong, then they need some type of leadership to rally people. The fear and confusion is so deep here, right now, I fear that nobody else is going to say anything,” he said. “That’s really the bottom line for me. I feel it is my duty to give my colleagues a chance to, in a collective and organized way, to as safely as possible voice their opinion on what’s going on and what direction we need to go.”

Jones said the main push back he has received for the article has come from faculty who feel that the problems runs all the way to the president’s office, not just A&S.

“The things that people have raised about what I wrote is that I have given the president and the provost a pass. That could be true, but I don’t know,” he said.  “I’m dealing with one thing at a time. I know how the climate has changed in my college because this is where I work every day. I can’t speak for the engineering school, the medical school, the law school, dental school or music. I’m speaking of what’s going on in my college.”

Jones said that Ramsey’s leadership, and the recent criticism of his performance, have never caused him to feel this strongly about the work culture at U of L.

“Jim Ramsey has been president of this school for very long time, and I have never felt this way in this college. That says something.”

For the time being, Jones’s focus is on hearing the faculty who feel strongly about the work culture of U of L.

U of L comes away with twelve Fulbright Scholars in 2019

New Executive Director of the Center for Digital Transformation appointed