“Hi, um, I’m here with the Louisville Cardinal, I’m the press for the show?”

“Yes.” Responded the man dressed head to toe in black, only a neon badge standing out from his silhouette.

“They said I could go backstage.”

Two knocks and a woman answered the door to let me in the dressing room. Cramped and hot with performers, I darted immediately to the back stairs, somewhat above their secluded area.

I managed a “Hi, my name is Maggie. I was told I could come back here for my school newspaper.”

If they hadn’t greeted me with open minds and hearts, I probably would have a mocking, “‘I’m here for my school newspaper,’ What the heck was that!?” in my head for the rest of night. 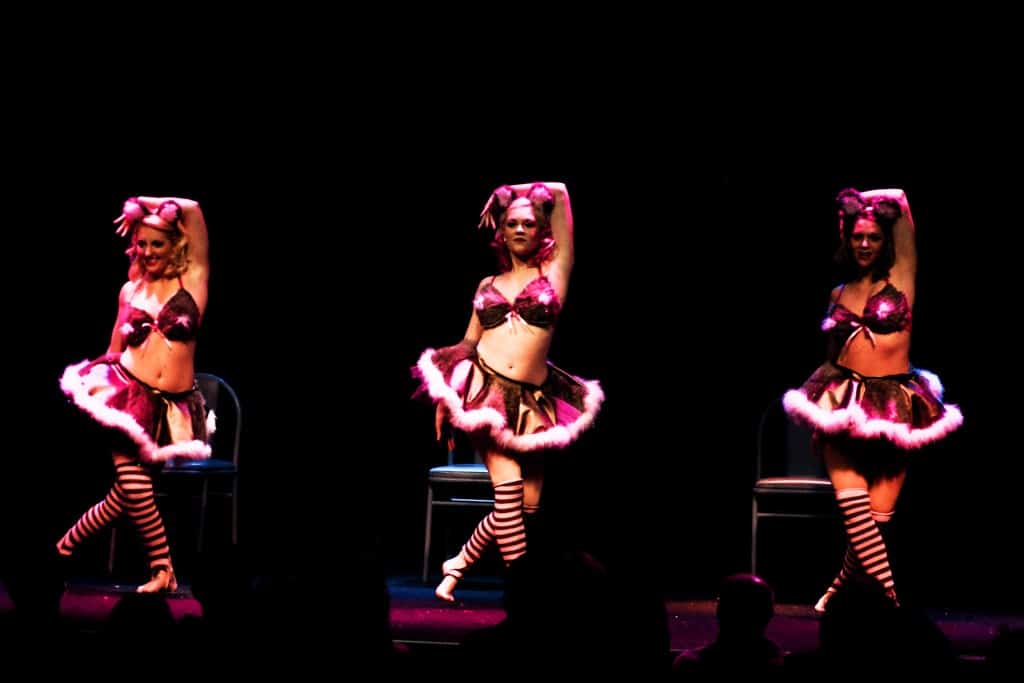 I talked to two performers of the show, each part of the Va Va Vixens for three years.

“My stage name is ‘Coop DeVille,’ and I’m mainly an actor, or dancer,” he said, as he pulled a hanger from the rack. He smiled proudly, like a boy showing his school uniform. “One of my parts tonight is Pinocchio.”

“Actually, we started together,” he added, high-fiving another performer who went by Venus Pearl onstage.

Glitter corsets, high heels, fluffy skirts, big makeup and shirtless men were part of their funky, handmade costumes, which decorate the Vixens from show to show.

Tutus were thrown over me, extremely vaudevillian makeup was applied to a girl next to me – none of this fazed the performers, who carried on their friendly conversation in the madness of getting ready for one of their biggest shows yet. 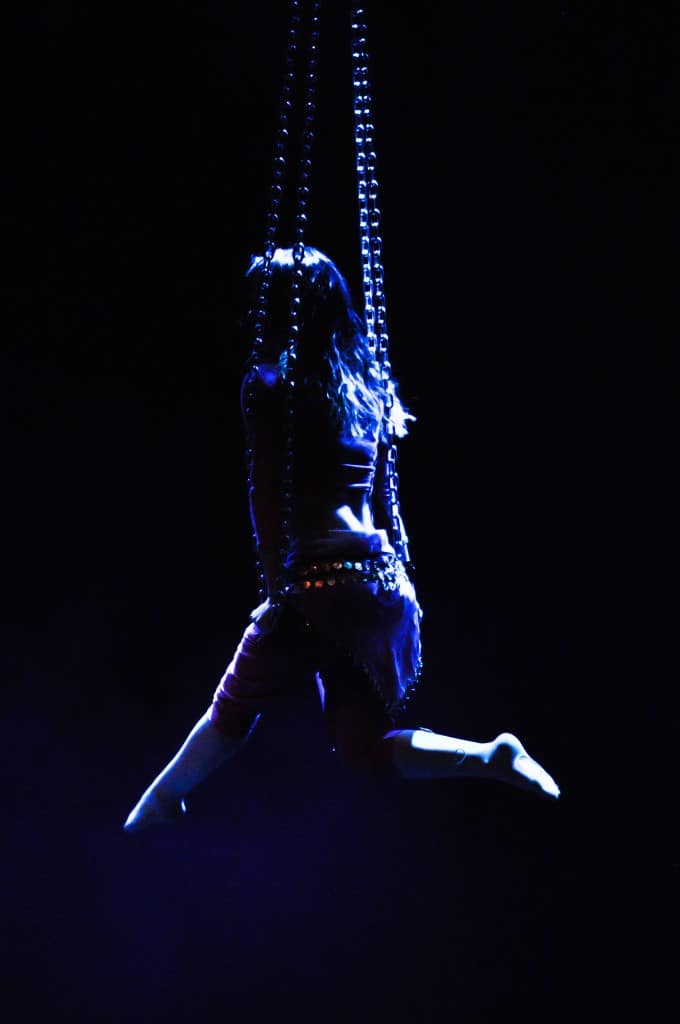 The Va Va Vixens are Kentucky’s biggest burlesque troupe, often performing at Headliners Music Hall or Melwood Avenue’s Art Sanctuary. In the past six years, they have evolved into a Louisville novelty.

“We’re more than just strip tease. It’s like, when I would tell people about ‘Va Va’ it’s a sexy, classy, circus,” a performer dressed as a green cat named Ethel Lovelace said, as she thrusted her hips towards me to show off her English flag fanny-pack. Her counterpart, another blue animal with makeup modeled after the Broadway show Cats, jumped in beside her.

In the Valentine’s show, Lovelace, along with two other performers, played Mother Goose’s loyal pussycats.

“Leanne Cooper made it, Leanne Cooper is our director,” Brigitte Boudoir said. “She makes the costumes, she did my makeup. She is literally a jack of all trades, it’s like we could not live without her and she runs rehersals and all that.”

As Boudoir’s third year in the show, she has formed a sort of alter ego with the Vixens.

“I’m also a legal accountant, so I do legal building and accounting during the day. And what’s adorable, is that the people in my law firm adore it! They act like they have a celebrity in the office, they watch me on Great Day Live – it’s their thing,” she said. “I wasn’t sure how this conservative law firm would feel with me being in burlesque, but they love it. One of them has one of our calendars hanging up in our office!” 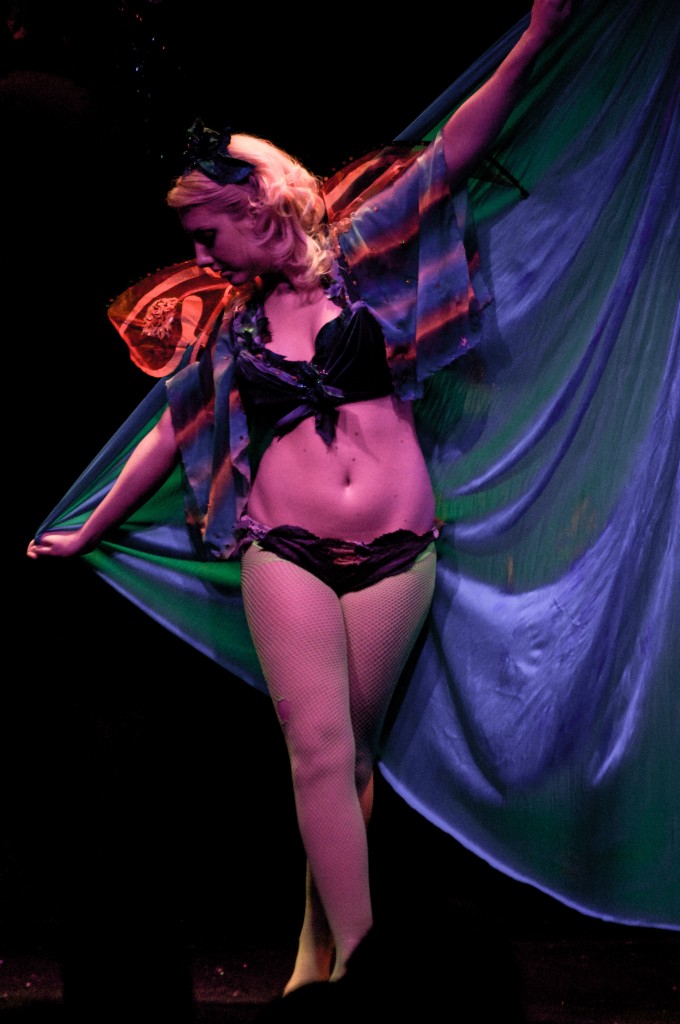 The Vixens weren’t all lawyers/burlesque dancers.

“Candy?” beamed a blonde girl in a sailor suit.

“Bunnies,” as they call them, are a part of the Va Va Vixen’s show to “make the crowd involved, feel welcome,” as one Bunny put it.

I grabbed an assortment off the bedazzled tray before Boudoir jerked my arm and I was distracted to meet an Original Vixen.

“Oh wait! Come here for a second. This here is what I like to call an ‘O.V.’ This one right here has been here since the very beginning,” she squealed.

“But she twirls machetes”

“Ok, Samoan Sabers. You could literally throw a phone book at this woman and she could spin it.”

I introduced myself, “Can I get your stage name?”

Kizznee was a perfect example of the support and inspiration the performers bring each other in their lives, and the show. Kiznee’s girlfriend, who performs as Christina Love, encouraged her to join the troupe. Kiznee, a 48-year-old Vixen, said the Vixens endorsed a cast of different shapes, sizes, ages, as well as talents, making for an all-star charm between the performers.

“Well, going through the divorce, low self-esteem, my girlfriend said that I really needed this. I did it.”

Like a cartoon, Boudoir piped up again, “We do a show together every time and we get along, but they try to make us kill each other,” as they wrap each other’s arms around their shoulders and exchange a menacing grin.

During the show, I recognized Kiznee doing the splits, high kicks and strip teases as The Big Bad Wolf and a sexy spider during the “Eight Leg Fan Dance.” 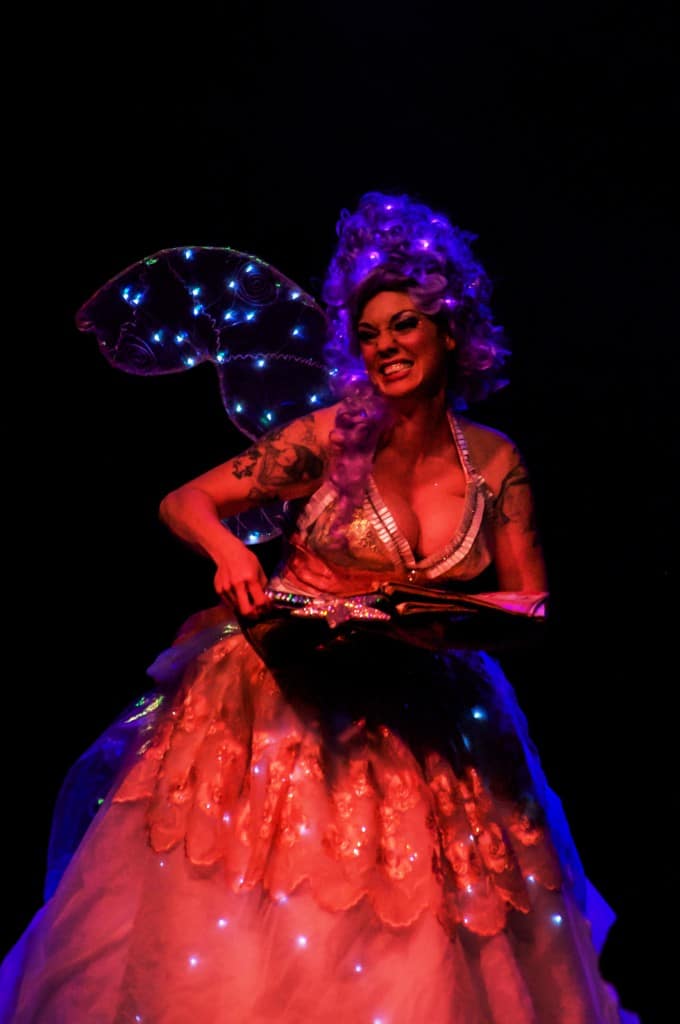 In the troupe’s Valentine’s seasonal show, “A Faerie Tale,” the Vizens achieved enchantment and a standing ovation. Framed with narration by the British Punk Mother Goose and a pixie-dust-addicted Fairy Godmother, the story revolved around frenemies’ banter, a battle-of-the-burlesque and fables. Their performance was set off with a mix of upbeat and classic songs–a soundtrack I wanted a mix CD of –including songs of sexual innuendos, artists like Disclosure, Brittany Spears, Lana Del Rey, Sia, Adam Lambert, Artic Monkeys, Florence and the Machine and Fergie’s “A Little Party Never Killed Nobody.”

The Va Va’s special charm was not just an act on-stage or backstage. Their friendly and easy attitude with the audience and each other made their talent dazzle even more than their sparkling costumes.

The Va Va Vixens will be performing  “A Faerie Tale” again Feb. 13, 14, 20 and 21. Tickets are available for $20 online at headlinerslouisville.com, or you can purchase them at the door at Headliner’s Music Hall.

What to expect at 2020 Welcome Week